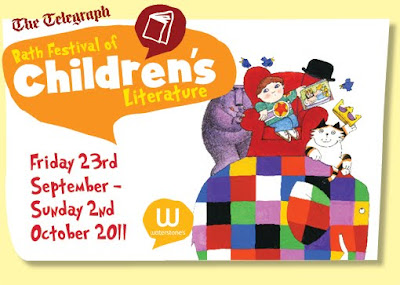 Mark and I are so excited about visiting Bath Kids Festival for the first time this year. We were heading that way as fans and readers, but got a fantastic surprise when we were approached by the organisors asking us if we would like to attend in our capacity as bloggers. We would be able to meet various authors and get the occasional one to one interview...

Wow! We could not say no. We considered which days to go down and booked our accommodation and we carefully, painstakingly and with various coloured markers, went over the schedule and chose which talks to attend.

And now we are set. I may not sleep until then.

In the meantime, the Festival organisors have come up with a fantastic way for us to keep busy. A group of bloggers, illustrators and authors are all taking part in creating an on-going story.

This is the press release:


The Bath Festival of Children’s Literature is launching a unique collaborative storytelling event on Thursday 8 September featuring well known authors and bloggers. There are 20 collaborators in the project including authors Marcus Sedgewick, John Boyne and Annabel Pitcher who will be appearing in the Bath Festival of Children’s Literature Festival, 23 September- 2 October. The story will be written in real-time with readers following the trail as it moves from blog to blog, with an addition to the story being posted at each stop.

The story will run from 8 September – 16 October with the first installment being posted on the Bath Festival of Children’s Literature blog http://bathkidslitfest.wordpress.com/ where readers can click through to the next installment. Every other day a new piece of the story will be posted and as it is being written in real-time it has the potential to touch on any genre imaginable.

Artistic Director John McLay said “We are hoping to highlight the creativity and dedication of both book blogs and author blogs, through which potential readers are enthused and entertained. There is an amazing amount of support for the book industry via blogging and this is a great way for Bath to capture that and do something fun and unique”.

The Bath Festival of Children’s Literature runs for 10 days between 23 September- 2 October and will be packed full of events for all the family – highlights include the amazing Cressida Cowell, this year’s brochure cover illustrator David McKee, funny-man Andy Stanton and Pirates of the Caribbean actor Mackenzie Crook to name but a few.

We will be blogging and tweeting from the event, so do make sure to follow us on Twitter - @LizUK and @Gergaroth. We will be there the first weekend of 24th and 25th September.

Events / talks we will definitely be attending:

Sounds like you are going to have an AMAZING time! Have fun.

Like the Japanese renga poetry. This is an interesting idea to get a story written. Filled with different genres and directions. I wonder how the starter of the story would feel if his intended is deviates 180 degrees.

Have a wonderful time - and remember we want to hear everything you get up to!

Wow that is just awesome. Have a fabulous time :D