Bracelet of Bones by Kevin Crossley-Holland 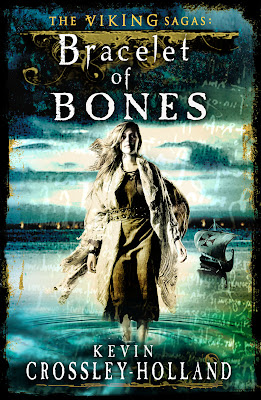 It is 1036. Halfdan is a Viking mercenary who is determined to travel to Constantinople and become one of the Viking Guard serving Empress Zoe. He promises to take his daughter, but one morning Solveig wakes up to find him gone. Setting off in her own tiny boat, she is determined to make the journey from Norway to the breathtaking city. Her boat is washed up, but Solveig is undeterred. What awaits Solveig as she continues on her summer journey across the world?

Bracelet made a nice change of pace from the testosterone fuelled mayhem of the other Viking books. It follows the journey of a young girl named Solveig as she sets out on an epic journey to join her father in the fabled city of Miklagard, where he has gone at the behest of an old friend. It’s not that he’s left that drives her, but that he has left without her.

In the days that follow his departure Solveig feels her world closing in around her, the banal demands of her stepmother and brutish half-brothers crushing her spirit. She knows the truth of the connection they share and, with the promise he made still ringing in her ears, she chooses to risk everything and set out on a journey into a world that’s unimaginably bigger and more dangerous that she can comprehend.

Solveig’s young and pretty, two factors that add to the risk in a world where slavery is more prevalent than law and order, but she’s also intelligent and strong willed. She’s a lovely and well realised character, by turns fey and innocent, fearless and vulnerable. The companions she gathers along the way are equally interesting, each with their own back- stories and personalities. It’s the interplay between the characters that makes Bracelet work so well, and helps to maintain the subtle tension that runs through it. For while there isn’t much violence, the threat thereof is present throughout and often comes from unexpected sources. After all, it’s a wild and dangerous world out there and Bracelet captures the feel of it admirably well.

The story is told in a style reminiscent of the traditions of oral storytelling, and the language used is almost lyrical and in tune with the old sagas. It really is a lovely bit of writing and clearly a product of passion and research.

Bracelet of Bones is the first of the Viking Sagas and if this is the caliber of storytelling we can look forward it, bring it on!

Can't wait to read this book - I have the thrill of appearing in an event with Kevin Crossley-Holland at the Cheltenham Festival on 16th October, where we will both be talking about Vikings. He is a wonderful writer!