The Opposite of Amber by Gillian Philip 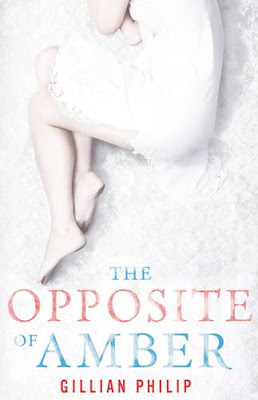 They found the fifth girl right after the snow melted ...the place where he left her was winter water, crazed with ice-feathers and dusted with snow. The traces from her body were gone, the ones that said his name, but she had an extra skin of ice that protected her and she looked perfect, like Snow White'.


Ruby and her older sister Jinn live together on their own, just about making ends meet. Jinn is beautiful, with glittering blonde hair, and makes it her business to look after Ruby. They are horrified by, but try to ignore, the local newspaper stories of prostitutes who are murdered, their bodies eventually discovered underwater. Then the no-good Nathan Baird turns up on the scene - again - and Jinn starts to change. First Nathan moves in with Jinn and Ruby, making Ruby feel an outsider, and then Jinn and Nathan move out, leaving Ruby alone. Jinn no longer has time to look after Ruby. And it seems to Ruby that Jinn herself needs looking after. Her beautiful glittering hair starts to lose its shine. And then Jinn disappears. A deeply moving, chilling, and incredibly powerful thriller that celebrates the love two sisters have for each other and mourns the events beyond their control that will conspire to drive them apart.

I am the world's most rubbish fan.  I love Gillian Philip's writing yet it has taken me ages to get around to reviewing The Opposite of Amber, which is truly crappy of me, considering how much I enjoyed it.

Gillian Philips has managed to create a very vivid experience for the reader, especially as the story is told from our main character, Ruby's point of view.  And Ruby is a very sensitive young girl who seems to experience things in high emotion.

When we meet Ruby she is pretty stressed out, thinking she had somehow made a school friend try and commit suicide.  Basically, Ruby was chatting to another boy at school, Foley, and Alex came up to talk to her, so she flippantly told him to jump off a cliff.  And Alex went and walked off the school's roof, injuring himself quite badly.  So she's in a pretty dark and emotional place.  All of this combines to make her feel pretty isolated and unwanted, added to the fact that her mum was never much of a mum in the first instance, so things are not at all pleasant for Ruby.

She adores her older sister, Jinn who, still very young herself, does her best to look after Ruby but is far too caught up in her own world, to really fuss with Ruby too much.

When the local bad boy turns up, and takes up his on again off again relationship with Jinn, Ruby's life takes an even worse turn.  She watches her sister Jinn go out of her way to do everything for him, making excuses and fussing around him, ignoring Ruby's feelings and inviting him to become their "lodger".  Unfortunately Jinn's love for Nathan is so all consuming that she loses her job and has to resort to walking the streets to try and care of them.  It is grim and unpleasant and stark and real.  Where Jinn was this gorgeous girl with a future ahead of her, it is Ruby, the quiet voiceless one, the shadow, who is forced to become tougher, stronger, grow a voice and to sort things out.

The relationship between the sisters is very important in the novel.  They are a unit, a family, and with Nathan added to the mix, along with his debt and the dangers that comes with that, it quickly turns into a mess.

Added to this, a range of serial murders has taken place.  A murderer has been killing prostitutes, or girls he assume are prostitutes and of course, with Jinn walking the streets, poor Ruby is scared senseless.

The novel is written in a very colloquial Scottish way, which for about five minutes made it difficult to get in to, but once you hit your stride it works to enhance the atmosphere and sense of place.  As usual Gillian stretches herself as an author and we get the full readerly benefit of her skills - she gives us a novel about trust, deception, sistership, motherhood, murder, love - the gamut of daily emotion.  She also gives us a fantastic heroine whose character undergoes tremendous development.  The novel is layered, interesting and very tense as well as intense.  I remember sitting down to read it and hunching my back and clenching my fist thinking "no no no".  It takes a writer pretty much at the top of their game to tap into a reader's emotion as strongly as this.

Every bit of this book was believable.  I loved the flawed Ruby and the senselessly brave Jinn.  I yearned for everything to go right for them, but of course, you'll have to read the book to find out if it does.  I'll allow myself one further bit of advice: have tissues ready.

Find Gillian's website here.  The Opposite of Amber is published by Bloomsbury here in the UK.
Who wrote this? Liz at 8:08 am

Email ThisBlogThis!Share to TwitterShare to FacebookShare to Pinterest
Labels: gillian philip, the opposite of amber