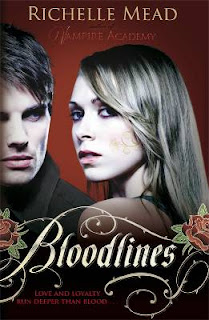 There will be Vampire Academy spoilers in this review!

Sydney belongs to a secret group who dabble in magic and serve to bridge the world of humans and vampires. She protects vampire secrets - and human lives.

But when Sydney is torn from her bed in the middle of the night, she fears she's still being punished for her complicated alliance with dhampir Rose Hathaway. What unfolds is far worse. The sister of Moroi queen Lissa Dragomir is in mortal danger, and goes into hiding. Now Sydney must act as her protector.

The last thing Sydney wants is to be accused of sympathizing with vampires. And now she has to live with one . . .

I'm a massive fan of Richelle Mead ever since I did back-to-back reading and reviews of the Vampire Academy series. I was very excited to get a copy of this book. Firstly because I'd already formed an attachment to Sydney in VA and secondly because I found the mythology of the Alchemists that had so far been revealed to be full of possibilities. I wasn't disappointed. In the first few pages we find that Sydney is being re-inked. The intricate tattoo on her face is imbued with extra magic ready for her last chance to prove herself loyal. She finds herself expected to protect Jill, sister of Lissa by pretending to be her sister and attending a boarding school.

First up I did initially wonder about the necessity to recreate the whole boarding school thing but I needn't have worried. Sydney is as different to Rose as it is possible to be. The school is a necessary hiding place but that's where the similarities to VA end. It's clear at the start of Bloodlines that Sydney is in a world of trouble. It's also obvious that her home life is pretty rigid and horrible. In VA she appeared aloof and cold but I actually found Sydney to be compassionate and caring but incredibly mucked up by her Alchemist training and, quite frankly, piss-poor father. He criticises everything from her apparent lack of control to her weight. An Alchemist called Keith is to be her superior on the expedition. Keith is such an awful, hateful character that I pretty much wanted to reach into the pages and rip his head off by his second sentence. There's obviously some sort of shady history between Sydney and Keith which is revealed as the book progresses.

There are familiar faces in Bloodlines. Rose and Dimitri make brief appearances and Eddie is Jill's guardian. It is the return of Adrian though which I'm most excited about. I've always been a massive fan of the hard-drinking, heart-broken ex of Rose and wanted more for him. He's still the same Adrian, cocky but a bit more mature than before. I loved watching the awkward friendship between Sydney and him grow. The book is full of mystery too - some of the kids at school have tattoos that do more than just look pretty, they give special gifts. Sydney has her suspicions and is determined to find out who's behind it all. Alongside all of this she has to deal with the awful Keith and his attempts to undermine her and her feelings for the Moroi.

I can't wait to read more of Sydney's story. She's such a complex character; reserved yet full of passion, damaged by her upbringing yet still able to see the best in others. Already I want the best for her. My heart broke a little when she compared her size four body to that of a fifteen year old, size two vampire. She seems oblivious to people's comments about her size as she pushes food around her plate. Mead deals with this subject with sensitivity and a light touch but I was left in no doubt that Sydney has a journey to go on before she can really start enjoying life. She also has to try and overcome her Alchemist training to enable her to connect with the people around her. She's already been changed by her experiences with Rose and the events of Bloodlines - I'm eager to see what happens next.

I Want To Read That said...

Great review! I loved it and Sydney is awsome! And I really fell for Andrian too...