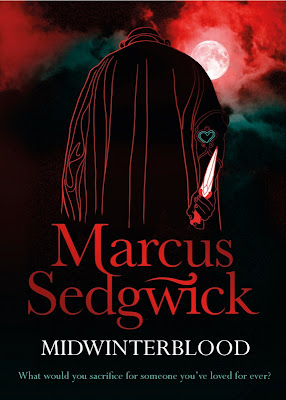 MFB are really proud to host, as part of Viking week, a bit of an exclusive: Marcus Sedgwick's Midwinterblood trailer and an even more exclusive mini-extract from the new novel, only out on release in October.

PART SIX
The Vampire
10th Century – The Snow Moon
Then came the beginning of wonders on Bloed Isle!

We buried Tor in the long meadow, in a mound some way from the others, though with the proper rites, for his was royal blood after all.  There was a short silence then, a short silence of days, in which a fresh snow fell, quickly hiding the bare earth and stones of Tor’s grave, and it felt as if we had been blessed.

But we were not blessed, and the blood was yet to come.
I do not remember what happened first.

Whether it was a dog or a cow.

No. I do remember now. Strange how walking the journey once more brings back both shade and detail.

One day, someone came to the great longhouse, holding the carcass of a dog.

‘It went mad,’ they said. ‘It went mad and began to claw at the cattle. I had to break its back with a spade before it would stop.’

That was the first.

The day after, the cattle began to give a great lowing, a terrible moaning, an awful sound, as when they give birth, though the calf moon was still long away, across the other side of the darkness of winter.

The sound rose and fell, rose and fell all day, until we went into the meadows, and saw that the cows were all in the fold, the winter fold, nearest to which was Tor’s grave.

He raised a hand to a cowherd, a young boy.

Manni did as he was bid, and was almost trampled by the cows as they stamped their way from the one fold to the other. Once in the far fold they grew quieter, though still a great cry would come from them, a
sound that haunted us, throughout the black night.

In the morning came the first of the blood.

Another dog was dead, but not, this time, at his master’s hand.  It was one of the bitches. She was found by the midden, with her throat torn, and her blood taken.

Father ordered the carcass to be burned, not thrown in the midden.

Eirik and I looked at each other, our eyes gaping.

‘Why is he doing that?’ Eirik whispered to me.

I tilted my head to one side.

What a fabulous trailer! I got an early copy of the book to review, and this trailer perfectly combines the menace and the love story.