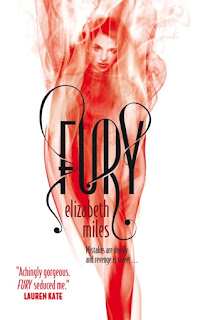 Synopsis
In book one of the Fury trilogy, Em Winters and Chase Singer discover that a little guilt isn't the only consequence of doing wrong. After Em hooks up with her best friend's boyfriend and Chase's secret harassment of a social outcast spirals out of control, three mysterious Furies-paranormal creatures that often assume the form of beautiful women-come to town to make sure that Em and Chase get what they deserve. Not everyone will survive-and those who do will discover there are worse punishments than death. But when Em befriends outcast Drea and learns more about who and what the Furies really are, she becomes resolved above all to take them down and stop their plans. Little does Em know that, by confronting the Furies, she could become inextricably bound to them for life.
I don't mind telling you that this book scared the crappola out of me. Not because it was creepy or dark (I mean, it's all that and more) but because it has this underlying sense of dread. Reading Fury is a bit like watching Final Destination - you know it's coming but you don't know when. The book opens with a girl throwing herself off a bridge. We soon learn that she ended up in hospital and rumours are spreading all over school. We meet Chase, a guy with a talent on the football field, eager to escape his trailer park background and Em who has a crush on her best friend's man. That feeling of dread had already started for me, it kind of builds gradually as the story unfolds.
As soon as Em's friend Gabby is out of the country, Em is straight round to see Zach. She tries to convince herself that she's not going to do anything but of course one thing leads to another. Meanwhile Chase has a secret and it's making his carefully constructed facade crumble. His background is pretty tough and he's desperate to not let anything slip that would attract the negative attention of the school. Then he has a chance encounter with a trio of girls, one of which has flame red hair and calls herself Ty. As he becomes more and more obsessed by her his life begins to unravel.
The books is based upon the Greek mythology of the Furies who avenge crimes with swift justice. In the case of Fury, these modern-day Furies bring a whole new angle to karma and reaping what you sow. I must admit that I didn't feel any sympathy or connection to any of the main characters but I loved smart Drea and loyal JD. I'm really hoping that both of them play a larger part in the next book. I think that's part of the point though, it's the main characters that attract the attention of the Furies with their shady behaviour which meant that I wasn't always sure if I liked them. By the end of the book I was left wondering if the Chase and Em got more than they deserved. Fury is not your usual paranormal story and I'm looking forward to the sequel although I may be peeking at the pages from behind my hands, or perhaps the sofa.
Who wrote this? Essjay at 7:30 am

OOh I like the sound of this. I like the idea that it scared you, filling you with dread. My kind of book!

Thanks for a wonderful review! You WILL indeed see more of JD and Drea in Book Two...