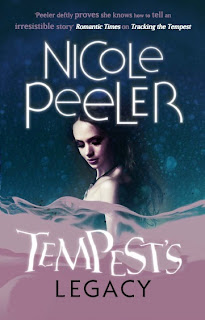 SPOILERS FOR THE PREVIOUS BOOKS IN THE SERIES
Synopsis
After a peaceful hiatus at home in Rockabill, Jane True thinks that her worst problem is that she throws like a girl – at least while throwing fireballs.

Her peace of mind ends, however, when Anyan arrives one night with terrible news . . . news that will rock Jane’s world to its very core.

After demanding to help investigate a series of gruesome attacks on females – supernatural, halfling and human – Jane quickly finds herself forced to confront her darkest nightmares as well as her deepest desires.

And she’s not sure which she finds more frightening.
The first two books in this series have introduced us to Jane True. She's always felt like an outsider and has suffered terrible losses in her life, struggled with depression and spent time in a mental institution. Soon after our initial meeting she is told that her mother is a selkie and that she's not altogether human. Fast forward two books and this series still fascinates me. She's come to terms with her new status and is trying hard to become offensively strong with her magic. However, she receives some devastating news which throws her straight back into the action again.
Each book has it's own story but running through the series is another, larger arc which follows the actions of the King's closest advisor Jarl. Jarl is responsible for a great many atrocities and Jane True and the gang are determined that he should be found guilty. However, proving that he's responsible for a number of suspect hospitals (for hospital read medieval houses of torture) is difficult as he makes sure that nothing can be traced back to him. Alongside all of this action Jane is juggling some very different problems. At the end of Tracking the Tempest it became apparent that Jane and Ryu were having a few problems. In Legacy we find that Jane is feeling a bit awkward around Anyan. She's used to him being a friend but suddenly she sees him as something more. I have to say that I love Anyan. He's the perfect combination of brawn and brains, both protective and caring. I'm all for them getting together but I'm not saying if they do!
One thing about the Jane True series is that they read like a dream. Jane has such a perfect voice. She's self-deprecating, loves her friends, has determination and drive but more than that she's outright funny and wild too. She guides the reader through the light-hearted bits and safely through the horror too. There's more world building in this book too. We meet a mysterious blond who is baffling everyone who comes across her, a whole new set of characters who are all half human and live together rather than with the "pureblood" supernaturals at the compound so that they can enjoy a more free life. I was excited too to see that there seems to be much more to Jane than we originally thought. She's of interest to many as her powers begin to properly manifest himself.
Another great episode in the series and the fourth book, Eye of the Tempest, is out in October so thankfully not long to wait.
Who wrote this? Essjay at 7:30 am

I keep seeing this series everywhere lately and I had never heard of it before. Definitely one I need to investigate.