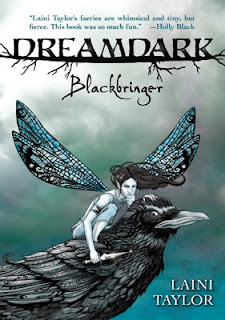 Synopsis
Magpie Windwitch is not like other faeries, most of whom live in tranquil seclusion. When she learns that escaped devils are creeping back into the world, she travels all over with her faithful clan of crows, hunting them down. The hunt will take her to the great forest of Dreamdark, where she must unravel the mystery of the worst enemy her folk have ever known. Can one small, determined faerie defeat the forces that threaten to unmake the world?
I started to read the Dreamdark series while I was waiting for copies of Daughter of Smoke and Bone to come out. I wanted to get a feel for Laini's writing style and was also won over by the amazing reviews. Books about fairies nowadays tend to be about life-size ones striding around making trouble in the human world. While I love many of those I was interested to read about a fantasy take on more traditional, tiny fae. Magpie is the granddaughter of the West Wind and lives in a travelling, flying parade of caravans which are pulled by talking crows. Come on, what's not to love there? She's small, independent and quite happy travelling with her friends, seeking out escaped devils to trap them back into bottles that unwitting "mannies," (humans) have freed them from. Magpie is pretty much the only fairy who is performing this vital task. Most other fairies live a peaceable life but have turned their back on the old stories of their rulers and enemies.
Magpie discovers an enemy so fearsome that it is capable of literally unravelling her world and bringing it to an end. She has to travel back to Dreamdark to try and find a solution. Along her way she meets a scamperer (fairy without workable wings) called Talon. He's a prince to the Rathersting clan, many of whom have been wiped out by the devils. He's determined to not let his lack of wings hold him back and with the help of healer Orchidspike he learns how to meld magic and knitting to fashion himself a way to fly. He's also working towards finding out what has upset the balance of the world. The two meet and work together to solve the mystery. I was instantly swept up in the world that Laini Taylor has created. There are so many wonderful characters and a way of life that is both idyllic but also flawed.
This book is a joy to read and a fresh take on fairies, hobgoblins and the such. Once (and it only took a couple of pages) I got used to Magpie's language I was happy to follow her anywhere. She was a constant figure of hope throughout. There's plenty of dark and horrific material in this book (I hated Batch - in a good way) but there's also plenty of beautiful magic too. I could have spent hours with Orchidstrike as she healed or with the wonderful Poppy. I was willing the Magruwen to see Magpie as I did, to see the strength in her soul rather than dismiss her as yet another fairy who had forgotten the old ways. Laini doesn't hold back either with characters who get their just deserts. When Lady Vesper claims to be an ancestor of the legendary champion Bellatrix, Magpie is so incensed that she turns her hairs to worms - real worms. I couldn't stop thinking of this, the imagery of, "… living worms, rooted at the scalp and wriggling." How disgusting is that?
The world of Dreamdark is so wonderful. I'll be reviewing the sequel on Wednesday and could quite happily read another handful of these books. If you'd like to lose yourself in a new fantasy world try this - it's a thrilling story that touched my heart too.
Who wrote this? Essjay at 7:30 am

I'd not heard of this series, but your review makes me think I ought to check it out. Thank you :)