The Journal of Dora Damage by Belinda Starling 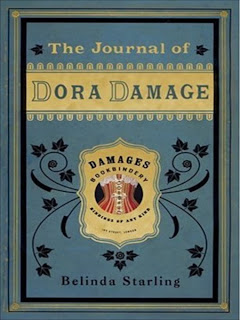 Synopsis
London, 1859. By the time Dora Damage discovers that her husband Peter has arthritis in his hands, it is too late – their book-binding business is in huge debt and the family is on the brink of entering the poorhouse. But Dora proves that she is more than just a housewife and mother. She resolves to rescue her family at any price and finds herself irrevocably entangled in a web of sex, money, deceit and the law.
I'm on a mini personal quest this year to get reading those books that have slipped below my radar. You know the ones - you see them and think they look good but other, newer and shinier ones keep getting in the way. The Journal of Dora Damage was passing through my library on the way to another when I saw it lying on the desk. I couldn't believe that I still hadn't got round to reading it and snapped it up.
We meet Dora just as she finds out that her rent is past due and the family book binding business is losing one of its best employees. Her husband Peter's arthritis is so bad that it causes him agony if he tries to work. When Peter goes missing Dora realises that she and her epileptic daughter have nothing to eat and are in real danger of getting thrown out of their home. After selling various items just to get food Dora realises that she needs a long term solution and decides to start binding books herself, following Peter's instructions. In desperation she persuades the awful bookseller Diprose to commission some work. From here she's introduced to Sir Jocelyn who has a vast amount of formerly illegal pictures and works that he wants re-binding. From here Dora is drawn into a dangerous and shadowy world of the upper classes and their pornography.
The book has a massive amount of fascinating historical detail and I felt as though I was alongside Dora every step of the way. Although I knew the sort of desperate life unprotected women could have in Victorian England I was surprised at how quickly you could slip from safety to the poor house and the fine line that women walked between respectability and having a dubious reputation. The Journal of Dora Damage isn't just a story of historical accuracy - it's also a love story and one of awakening and self-discovery for Dora.
The Journal of Dora Damage is a gem of a book. It both educates and entertains, horrifies and heartens in one fell swoop. Dora is a wonderful heroine, resourceful and unaware of her own attractions. People often refer to Victorian era books as being Dickensian but this is the first I've read that actually deserves that title. I read it knowing that the author sadly died before the book was published which is a terrible loss both to her family and the world as I think she would have had a wonderful career.
Who wrote this? Essjay at 8:00 am