The Immortals: Shadowland by Alyson Noel 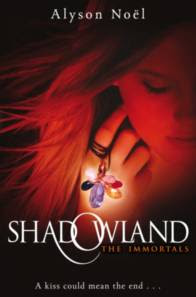 WARNING: SPOILERS FOR EVERMORE AND BLUE MOON!
Synopsis
Ever and Damen have travelled through countless past lives – and fought off the world’s darkest enemies – in search of each other. But just when their destiny seems finally within reach, a powerful curse falls upon them. A single touch of their hands, a soft brush of their lips will mean death for Damen – cast into the darkness of the Shadowland. But as she seeks to break the curse, Ever meets Jude – a green-eyed, golden surfer boy who understands magick, and understands Ever better than she realises. And she begins to ask a terrifying question: even if you’re immortal, can true love really last forever?
Good news first - Damen has been saved. Bad news - Ever has inadvertently triggered a curse which means that Damen is viciously allergic to Ever and just a touch could kill him. I kind of like this neat resolution to the will-they-won't-they question. It ensures that we're focused on the story rather than on Damen and Ever's intimacy issues. To make matters more serious his brush with death meant that he was sent to the Shadow Land which is a place where immortals go when they die. It's a bleak and lonely space where an immortal will exist for all eternity completely alone. The result of all this bleakness is that Damen is much more serious in this book than he has been before. He starts to turn his back on his love of fast cars and cool clothes and instead hopes to earn some good karma by giving something back.
Just as I was losing patience with Damen we're introduced to the gorgeous Jude who brings some much needed light relief. Jude is the grandson of occult shop owner Lina. He's covering for the summer and Ever finds herself drawn to him. I loved the introduction of Jude as he's laid back, relaxed and able to provide the voice of reason in quite an intense book. Ever starts to help out at the shop and through her work there is drawn into a world of magic and starts to get completely out of her depth.
Roman is fabulously cruel throughout and all the more wonderful for it. He really is the character that I love to hate. He really didn't disappoint at all and stayed true to his awful self throughout. He continues to manipulate those around him and to make things as difficult as possible for poor Ever. Ever makes a string of unwise decisions and I did find myself feeling a little exasperated with her at one point. However, what I found refreshing was that ultimately Ever has to make some quite startling discoveries about herself and make some changes. These involved actually listening to others for a change and opening her mind to new possibilities.
Shadowland is my favourite Immortals book so far. The introduction of new characters keeps the series fresh and I feel that Ever had something of a personal revelation in that she made some important discoveries about herself and her how her repeated behaviour was holding her back. Secondary characters such as Miles and Haven add a great deal to the story and hint at future plot lines. The series is opened up by the events of Shadowland and I'm excited to see what happens next.
Who wrote this? Essjay at 7:31 am