The Dead of Winter by Chris Priestley 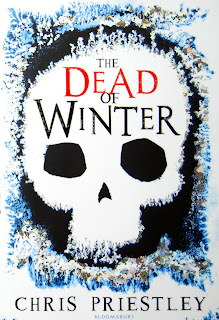 Michael Vyner recalls a terrible story, one that happened to him. One that would be unbelievable if it weren't true! Michael's parents are dead and he imagines that he will stay with the kindly lawyer, executor of his parents' will ...Until he is invited to spend Christmas with his guardian in a large and desolate country house. His arrival on the first night suggests something is not quite right when he sees a woman out in the frozen mists, standing alone in the marshes. But little can prepare him for the solitude of the house itself as he is kept from his guardian and finds himself spending the Christmas holiday wandering the silent corridors of the house seeking distraction. But lonely doesn't mean alone, as Michael soon realises that the house and its grounds harbour many secrets, dead and alive, and Michael is set the task of unravelling some of the darkest secrets of all.

Dead of Winter starts with an introduction by the main character, Michael Vyner, as he sits down to record the strange and terrible events that shaped his life. Thereafter it shifts into the past, and we meet Michael as he stands at his mother’s freshly dug grave, his only companion the stiff-backed lawyer handling their meagre estate. There he’s given the news that he is to be taken in by the aged benefactor whose support his mother had reluctantly accepted after Michael’s father gave his life to save in a past conflict.

Michael’s understandably less than enthusiastic, and sets off into the bleak, fog drenched fenlands that surround his new home with a heavy heart and no little foreboding. Matters soon take a turn for the strange in Chris’s distinctly gothic manner, and from thereon in Michael’s world becomes one of disembodied whispers, shadowy apparitions and a growing sense of dread as Hawton Mere begins to relinquish the secrets buried within its walls. Michael is a conflicted character, haunted by the grief of his mother’s recent death, plucked from everything familiar and thrust into a strange new world presided over by his even stranger benefactor, a man he can’t help but resent for what he represents. His loneliness and fear are offset by his awkward but genuine interactions with the staff, and the scenes amidst the warmth and bustle of the kitchen contrast starkly with the subtle malevolence that grips the rest of the house and each is enhanced by the other. It’s cleverly done and very effective.

Dead of Winter is a delightfully dark gem and reaffirms my opinion of Chris as a masterful storyteller. His voice is very distinctive and like his previous works, it begs to be read aloud on a dark and stormy night - an audio version would go on my wishlist in a heartbeat.

I have this on order for the school library, I might have to be the first one to borrow it ;)

Like the review! It's a good book, I enjoyed it but wouldn't read it again.