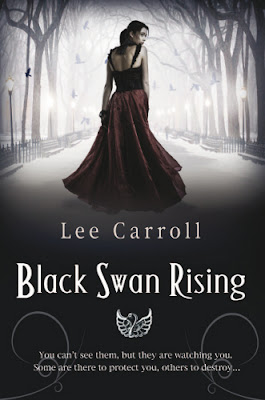 Jeweller Garet James isn't the same as everyone else.

She just doesn't know it yet.

With her fair share of problems – money (lack of), an elderly father, a struggling business – Garet should be just like any other young, feisty, single New Yorker. If only it was that simple...

It begins with the old silver box that had been soldered shut. All Garet has to do is open it. A favour for the frail owner of the antiques shop. Who wouldn’t help?

Only it’s then that things start to change. Garet doesn't notice at first, the shifts barely perceptible. But the city in which she grew up is beginning to reveal a long-hidden side – darker, and altogether more dangerous: parallel world of chaos, smoke and blood.

And now it’s out of the box...and it has no intention of going back in.

I read Black Swan Rising in September when I got stricken down with a rubbish cold.  I read it in two days and then promptly re-read it again.

Lee Carroll has managed to give mystery and magic back to the urban fantasy genre that has become over populated with kick ass females and sparkly vampires.

In Black Swan Rising (BSR) we meet Garet - she is a professional young woman, a competent and creative jeweller, who has to face some awful facts: the house that she shares with her father, a dealer in artwork and a friend to a variety of artists and creators, will be taken by the bank to cover their escalating debts.  Her dad had made some unwise purchases on the cusp of the market collapsing and now they're stuck with some amazing pieces of art which sadly they can't get sold.  And even in a recovering market, things were looking tough.

Garet's strength lies in her ability to be both a creative person and a realist, not usually traits we see that go hand in hand, or at least not in the books and movies, when artists are portrayed.  She forms a sharp modern contrast to her father who is quite elderly and perhaps a bit frail, who lives his life remembering the past, the good times, the golden years, as such. He also still mourns the loss of his wife some years before.

I've never been to New York but obviously know quite a bit about it because of movies and TV shows and books, yet even this fleeting knowledge was good enough to anchor me in BSR because really, Garet's entire story is told within the NY landscape.  The city and the river is as much a part of the story as the characters we meet and I loved that.  It has made me yearn to visit so much.

Garet's choice to huddle in the doorway of a small shop to get out of the rain, after receiving the bad news of their escalating debt initially seems random, but as the story of the shop keeper and the mysterious box he asks her to open, unfolds, you realise there is more to this random encounter than meets the eye.

Then, after she manages to open the box, and then their home and studio gets broken into, Garet's spidey sense starts to tingle even more.  Something is going on, the box is the key, but so is the signet ring she wears - the signet ring with the swan rising.  Her father suffers quite badly in the break-in and is rushed to hospital.  The care given to him there by the kindly staff enhances yet again the sense of community within the novel.  As is her growing friendship with one of the male nurses, Obie.

As Garet slowly but surely starts piecing together some bits of the story about the break in, the box, her own heritage, and what might in fact be going on, there is this great sense within the novel that you are pushing your way through a fog, only to discover one thing, that leads to another, that leads to another.  That, people, is great plotting.

Now, this obviously wouldn't be urban fantasy without Garet somehow becoming involved with supernatural beings.  In this instance she has several encounters with fae creatures and a vampire, amongst other things.  There is an element of romance but in no way is it the driving force behind the novel to the extent where the actual narrative suffers.

What I enjoyed about BSR is that Garet grows so much within the context of the story.  No, she does not become an improbably tough kick ass female with devastating martial skills, but she does learn about her own strengths and gifts she inherited being from a long line of female protectors. She is shown ways to fight and guard against the man who gave her the mysterious box; none other than the infamous John Dee.

There is really quite a lot more to say about this book but really, if you are looking for a thoughtful, beautifully written book, anchored firmly in the urban fantasy genre, but breaking the rules and being quite literary, at the same time, I can't recommend Black Swan Rising enough.  I am not fond of "if you like this, you will like this" recommendations but in this instance I have to list a few novels and authors I think you may have read / know of which may encourage you to pick up Black Swan Rising:

A final thought: I do think that some of the more mature readers of YA (and I mean aged 16+ not mature as me aged 37) may very well enjoy reading Black Swan Rising.  It has a dark heart but the main character's growth and discovery of herself will definitely appeal to readers who are keen for a book that has more scope and plays off against a larger background.

Black Swan Rising is out 25th November 2010 from Bantam Books / Transworld.  And I've just realised it will make a perfect Yule pressie as its atmosphere is very much suitatable to that time of year.  Clever!
Who wrote this? Liz at 11:53 am