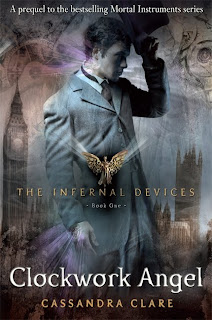 Magic is dangerous - but love is more dangerous still... When sixteen-year-old Tessa Gray arrives in England during the reign of Queen Victoria, something terrifying is waiting for her in London's Downworld, where vampires, warlocks and other supernatural folk stalk the gaslit streets. Friendless and hunted, Tessa seeks refuge with the Shadowhunters, a band of warriors dedicated to ridding the world of demons. Drawn ever deeper into their world, she finds herself fascinated by - and torn between - two best friends, and quickly realizes that love may be the most dangerous magic of all.
I was terrified for Tessa from almost the first page; arriving in London on the strength of a letter from her brother, she's met by a servant and ushered into a coach. Unfortunately for Tessa she's been abducted by the Dark Sisters who have great plans for her. They seem to know something about Tessa which she had no idea about. Once she discovers the truth and meets up with the Shadowhunters Tessa has to learn how to live a new life. Her new home is the London Institute, home of the Shadowhunters led by the fabulous Charlotte. Fortunately, the Institute doesn't mirror Victorian society - they have their own norms and values. As before, Shadowhunters inhabit a strange, shadowy world that lies hidden from humans (mundanes). It's made all the richer for the Victorian background which adds a foggy, mysterious, gaslit hue to the proceedings.
Shadowhunter Will saves Tessa from the Dark Sisters and so begins their tortuous relationship. It's very push-me, pull-me and Tessa is both attracted to him but held back by the norms of the era. He's an interesting hero and I found myself loving and hating him in the space of a couple of sentences. There's also tragic Jem who's sensitive and thoughtful where Will is infuriating and obnoxious. I found myself leaning towards Team Will though, and I feel there's a great deal more for the reader to discover about him in the next book. I even found myself adoring Jessamine the reluctant Shadowhunter. She was brought up to get married and have a secure family life but finds herself slaughtering demons in fantastic dresses. I'm looking forward to seeing how her character grows in the next instalment.
There's too much in this book to fit into one review. Magnus plays a big part and I loved meeting him in his earlier life. If you haven't read the Mortal Instruments trilogy it won't matter but for those who have, it adds a great deal to Magnus's character. He has a very one-sided relationship with the vampire Camille and I found myself feeling sorry for him. He lives on through generations, very much alone.

This book is a perfect example of how wonderful fantasy can be. I'm often hear people say that fantasy or horror are not genres to be taken seriously. However, I believe that Clockwork Angel perfectly illustrates the tricksy qualities of human nature; it just so happens that there are a few vampires and magicians thrown in. I can't argue that I read it to be reacquainted with the world that Cassandra Clare has created but I was touched by Tessa's story. She showed how it's possible to lose everything but gain in equal measure - a real gem of a book.

I read this the first time in a huge rush because I was so excited to get an advanced copy from Walker, and I have to admit that I felt a little disappointed when I finished it. I think because it was just so different to Mortal Instruments (which I LUURVE).

But it's a *good* thing that it's different. I would have been even more disappointed if it had been a tired re-hash. I ought to read it again and judge it a bit more fairly this time.

Have you read The Mortal Instruments series by Clare too?
I really love the series..