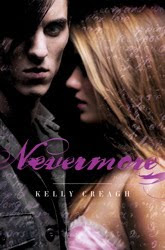 And the raven, never flitting, still is sitting, still is sitting
On the pallid bust of Pallas just above my chamber door;
And his eyes have all the seeming of a demon's that is dreaming,
And the lamp-light o'er him streaming throws his shadow on the floor;
And my soul from out that shadow that lies floating on the floor
Shall be lifted - nevermore!
-- from "The Raven" by Edgar Allan Poe

At once an homage to one of America's greatest writers and a page-turning psychological mystery that is equal parts horror, humor, and romance, NEVERMORE is the story of Varen -- a Poe-fan and goth -- and Isobel -- a cheerleader and unlikely heroine. When a Lit. project pairs the two together, Isobel finds herself steadily swept into Varen's world, one that he has created in his notebook and in his mind, one where the terrifying stories of Edgar Allan Poe come to life. Isobel slowly learns that dreams can be much more powerful than she'd ever expected, and that pain and despair come in all sorts of shades. As labels of "goth" and "cheerleader" fade away, she sees more in Varen than a tall, pale outcast, and a consuming romance is braced against the ever-clearer horror that the most terrifying realities are those within our own minds.

When Isobel has a single chance to rescue Varen from the shadows of his own nightmares, will she be able to save him -- and herself?

I don't know a great deal about Poe, never studied him at college or knew a much, if anything about his life. It didn't affect my enjoyment of this book one bit except that I've vowed to start reading some of his work. This will probably be quite a gushy review, be warned!

Isobel is a cheerleader, Varen is a goth and their forced pairing for a literature paper horrifies both of them. Isobel needs a good grade though, to ensure that her place on the cheerleader squad isn't at risk. He writes his number on her hand - an action that kick-starts a sequence of events that leads them both into terrifying nightmares that become reality. Isobel's "friends" react badly to the pairing, if they hadn't have done so the part of Isobel that stands up for what's right may not have been awakened. They're horrified that she is working with him and are merciless of what they believe to be her lack of loyalty to them.

I thought that the dark edge in this story would come from the alternate, dreamlike Poe world that Varen had created and whilst this is true Isobel's friends provided a great deal of sinister moments. The mechanics of high school cliques is shown at its ugliest and Isobel suffers simply because she's not prepared to ridicule Varen in a way that the majority thinks is appropriate. She sees beyond his surly exterior and starts to notice little things about him: his graceful hands, intense gaze and intriguing writing in his notebook. Varen is a fascinating and complex character, I have to admit to having a crush on him. I found myself willing them to get together as everyone around them turn against them.

I say everyone, but this brings me to the secondary characters. Gwen is Isobel's only supporter. Prior to meeting Varen, Isobel's only interaction with Gwen was that they shared neighbouring lockers. Isobel realises that Gwen is a pretty cool and individual girl. Isobel's parents play a big part in Nevermore. I found it refreshing that she has a good relationship with them and that it's portrayed so positively. Awful boyfriend, Brad, is suitably hateful and I found myself wanting to shake Isobel's dad for not seeing him for what he is.

As the story unfolds the world of Poe and reality start to mix with disturbing results. One of the many things I loved about it was that Isobel stayed true to herself throughout. She loves being a cheerleader and I would have been disappointed if she'd decided to leave it behind. Varen and Isobel are completely different but neither of them compromise themselves to be together. I found Nevermore to be brilliantly written, haunting and beautiful. It's my favourite book of the year so far and I can't imagine anything topping it. Excuse me while I head off to hunt out some Poe.

That's great that this novel has inspired you to read Poe's own works.

If you liked "Nevermore," you should like the "sources" as well!

I loved this book too, and am so glad you enjoyed it! I loved the idea that both characters remained true to who they are, but connected despite their different cliques and foibles. Great review! And I hope you enjoy delving into Poe just as much as you enjoyed this book :)