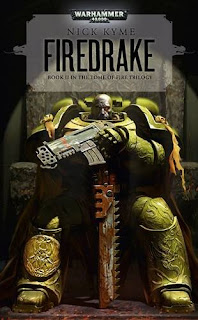 When Chaplain Elysius of the Salamanders is taken captive by Dark Eldar, he faces a fight for survival at the hands of these cruel aliens. The Firedrakes of 1st Company attempt a daring rescue mission, but much more is at stake than the Chaplain’s life. He holds the key to secrets buried beneath Mount Deathfire, secrets that could reveal the damnation – or salvation – of their home world. The Salamanders must penetrate the Port of Anguish and defeat the xenos threat there if they are to unveil the mysteries within the Tome of Fire. Meanwhile, Dak’ir battles to survive the brutal Librarian training, and in his visions lies an even darker future…

Firedrake is the second book in Nick Kyme’s Tome of Fire trilogy and picks up shortly after the events of Salamander. It kicks off with Chaplain Elysius leading the Salamanders as they prosecute a bloody campaign against the sadistic Dark Eldar who aren’t behaving quite as they should be. . there’s little to prepare Elysius and his squads for the uniquely Dark Eldar ambush that awaits them. While they’re struggling for survival in a nightmarish cityscape riddled with hunting parties, cannibalistic vermin and shifting geography, Dak’ir is coming to grips with his new role as Librarian under the rigorous tutelage of Pyriel, who is realizing the potency of Dak’ir’s gift.. a gift which lies at the centre of an ancient prophecy that could spell either the doom or the salvation of their Chapter.

And that’s just the start of it. There’s so much crammed into it that I’m not going to try covering it all here- you’ll have to take my word that there’s no shortage of blistering action, savagery, heroism and betrayal. Otherwise this piece will be at least 3+ pages long, and neither do I want to give anything away. Nick’s worked hard to infuse the book with a sense of dramatic urgency that translates in frantic page turning and I don’t want to dilute that. He puts his cast of characters, both new and familiar, through hell and offers no assurances that any of them are actually going to make it, but those that do won’t be the same either, and it’s good to see them growing in reaction to their experiences.

He keeps a tight rein on the various threads, weaving them around each other but keeping each distinct, which is no mean feat given the amount of cool stuff crammed between the covers. I’d strongly recommend you read Salamander before approaching Firedrake- once you open it, it won’t let you go until you reach the end.

The picture above doesn’t do Cheoljoo Lee’s awesome artwork justice- you can see a larger version here and read an extract of the book here.