This is not a review! 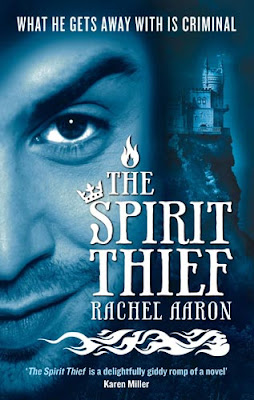 ﻿
I will be reviewing The Spirit Thief by Rachel Aaron for sfrevu.com later this month.  But as it is still some time away, I really just wanted to do a brief write-up about it to let you know that it really is aces.
This is from Orbit's site:
Eli Monpress is talented. He’s charming. And he’s a thief.

But not just any thief. He’s the greatest thief of the age – and he’s also a wizard. And with the help of his partners – a swordsman with the most powerful magic sword in the world but no magical ability of his own, and a demonseed who can step through shadows and punch through walls – he’s going to put his plan into effect.

The first step is to increase the size of the bounty on his head, so he’ll need to steal some big things. But he’ll start small for now. He’ll just steal something that no one will miss – at least for a while.

Eli Monpress is a rogue and a scoundrel and we love those.  His single act of stealing a king sets in motion events he can't begin to have conceived.

I started reading The Spirit Thief on Monday morning and moved through it so quickly because the writing is so engaging.  The secondary characters are also well scripted with Eli actually being the one you're not entirely sure of.  I loved the mystery factor surrounding him.  And there is hardly any back-story to these characters which is just fantastic.  You get to know them very well, very quickly as the story unfolds.  The world building is intricate and clever and never boring. I stood no chance as a reader.  I am completely in love with Eli, Josef (the swordsman) and Nico (well, what is Nico exactly?) and with Miranda (the Spiritualist aka wizard). I cannot wait to read the other two books in the series.

Wish you had said more. I am already loving this.

I read the first two chapters of The Spirit Thief. Very, very promising. It radiate an ease which I find compelling.