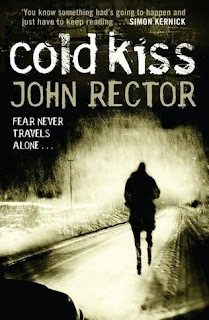 Nate and Sara are broke -- and on the run from the past.

When a shady hitchhiker offers them cold hard cash for a lift, they can't afford to say no.


But very soon they'll be wishing they had. Because picking him up is about to become the biggest mistake they ever made -- and the price they'll have to pay will be greater than they ever could have imagined...

I read Cold Kiss in one sitting.  Cover to cover.  It's one of the books I picked up at the S&S bash a few months ago.  I've been sitting on this review since then, but only after I squealed at Ally at S&S about it and emailing the author, John Rector and gushing at him about it.

If you like being scared.  If you enjoy twisty dark stories.  If you like a tense well written psycholgical thriller with dubious characters, Cold Kiss is for you.

Nate and Sara are likeable as this young couple - they aren't innocents, not by a long shot.  Nate's been in bad places and Sara is a girl who is learning to cope with what's coming her way.  Nate is a pragmatist and knows the reality of the future they face together, running away with very little money and the world, basically, against them.  Sara is softer, slighty more innocent but also aware of the difficulties ahead for both of them, as they run from her home and family.

Throw into this mix of anxiety, an awful snow storm getting worse and a hitch-hiker with a wet awful sounding cough, who begs the two runaways for a lift.  He's prepared to pay them hard cash.

If this were a movie, you'd be screaming at the screen for the two young lovers to get in their car and drive.  Fast! Away from this.  In fact, I still shouted at the book and muttered to myself.  The money wins them over, it has to.  Giving this weird rude man a lift, is not something they are keen to do, but Nate faces the reality that the money will be a way for them to make a start wherever they decide to settle.

So they give the stranger, Sylvester White, a lift as his car broke down and wouldn't start.  And initially things are okay-ish, but Syl's questions are a bit too personal, a bit too uncomfortable.  And gradually, outside, the storm becomes worse as they barrel along a dark highway.

They come across a rather ratty motel and decide that they have to pull in as the weather outside is getting worse.  Nate arranges for a room and when he gets back to the car Sara is in a state.  Syl's not breathing.  A complete nightmare situation.

As it is, as a reader I was already tense.  Reading this made me go, phew, that's okay then, he's not going to turn into an axe murderer or something and kill them.  Oh, how the author laughed up his sleeve at me.  Because this is just the beginning of the amount of crap that gets ladeled over Sara and Nate and if you think things can't get worse, well, think again, because they do.  Much much worse.

There are very few books I've read where I have felt such despair for the characters.  Few authors have that ability to really make me feel like I want to sit down and cry for the amount of trouble they dump their characters in.  Robin Hobb is one of these, as is Jim Butcher and now, John Rector.

As you read Cold Kiss you KNOW the shiz is going to hit the fan but you just don't know how or when or to what extent.  That pure anxiety just keeps you turning that page because you have to know how it pans out.  And those twists just keep on coming.

Cold Kiss is perfectly suited to be made into a horror / thriller movie.  But really, I hope it doesn't happen because the screen will not be able to convey the tension John Rector manages to create in this slender offering.  It blew me away - I mean, I like being scared but this thing, boyo, it freaked me out.  Also, sometimes you find that the endings to thrillers are a bit of a let-down.  Gmpfh - not in this case.

I'd wholeheartedly recommend Cold Kiss to crime, horror and thriller readers.  It goes that bit further, breaking through the boundaries of standard genre fiction, and delivers a whole fist full of icy cold goodness.

Find John Rector's website here.  You can find Cold Kiss in all bookshops and online.
Who wrote this? Liz at 8:14 am

Check your medicine cabinet before picking up The Cold Kiss, dear reader, because once you get into the deep dark mess at the heart of this book, you’re gonna want to pop beta blockers by the fucking fistful.