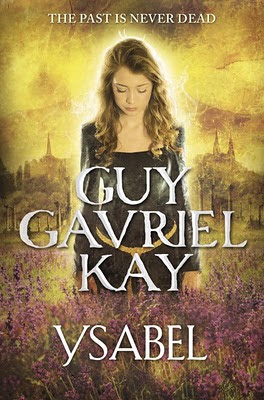 Ned Marriner, fifteen years old, has accompanied his photographer father to Provence for a six-week "shoot" of images for a glossy coffee-table book. Gradually, Ned discovers a very old story playing itself out in this modern world of iPods, cellphones, and seven-seater vans whipping along roads walked by Celtic tribes and Roman legions. On one holy, haunted night of the ancient year, when the borders between the living and the dead are down and fires are lit upon the hills, Ned, his family, and his friends are shockingly drawn into this tale, as dangerous, mythic figures from conflicts of long ago erupt into the present, claiming and changing lives.

I have been aware of Guy Gavriel Kay - obviously - for a long time but have never actually read any of his books.  Until I wandered into Waterstone's recently and spotted the paperback of Ysabel.  That cover wooed me and I tucked it under my arm and started reading it when I got home.

I took it with me to the Dordogne and the one thing I regret is not being able to read in a car.  I would have been able to finish it in one long sitting, during those long hours of drive.  However, it gave me the chance to read it in France, not in Provence, mind you, but pretty damn close.

Ysabel really surprised me.  I did not expect the comfortable home life the author created for Ned, his father and his father's various assistants as they go about their various location shoots in Provence.  There was a lot of banter within this group and the way Ysabel's been written, from Ned's perspective (third person point of view really, but with Ned as the main character) the reader is drawn into these people's lives.  The people you meet on the page are the people you meet on the page - little back story to be had but it really made the story immediate and also intimate.

Personally, I do struggle with books that have a large cast because I sometimes forget who is who and what each is supposed to do / be about and I think a lot of other readers feel the same.  However, the cast in Ysabel is around eight people, with two more "supernaturals" thrown in, yet all of them have very distinct personalities and I found it no difficulty at all, keeping track of everyone, even when I wasn't reading it, merely thinking about it.

Ned's friendship with Kate (a fantastically nerdy girl who I grew to like a lot) is a new thing keeps them both fresh in the reader's mind.  Ned is a cool kid - very much aware of the outside world, technology and he is an okay student but an excellent athlete.  The nerdy Kate forms a great companion and foil for him.

Ned is accompanying his father, Edward Marriner, on a photographic trip to compile a coffee table book.  With them is Melanie, Marriner Snr's very competent assistant and two others, who form the rest of his road crew.

Ned is left to his own devices and wanders through a cathedral when he meets Kate.  There is an instant connection between the two young people and I smiled several times as their chat.  It is here that they meet a mysterious man coming up from below the cathedral which itself had been built over some ancient Roman ruins.  Something goes "click" in Ned and it is as if he has a peculiar connection to the cathedral and the stranger.  The stranger refuses to tell them what he's been doing there, save to say that he's on the trail of an enemy.  Ned and Kate refuse to take the stranger at face value.  He's acting just that bit too weird for his own good and add to that Ned's peculiar feelings about him and the area.  As Kate is there when it happens, she is drawn into Ned's determined quest to figure out what is going on.


**minor spoilers**
But briefly, to explain: two male characters from 2600 years ago have been warring through time to gain access to the enigmatic Ysabel.  The two, Phelan and Cadell have been rivals for her affection through all this time - they are reborn / awakened to fight their battles over and over, having started when Ysabel's original incarnation chose Phelan, a stranger / foreigner, over Cadell as her new partner, back in ancient times. Ysabel never returns in her original form - she takes over the body of a young woman of the time the "game" starts anew, basically enslaving someone else whilst she inhabits her body. And now, Ned is somehow involved as he can sense both Phelan and Cadell and Ysabel.


**minor spoilers over**
﻿
﻿Throughout the weirdness we are aware of Ned's mum being abroad, working for an aid programme in war torn countries. And it is only when Ned's aunt turns up, and she explains to Ned that like him she can sense and know things that others can't begin to feel or understand that matters kick up a higher notch.  His aunt and mum no longer speak, having had a massive falling out when they were much younger (here we have some back story, but it is kept vague still) as his mum always thought her sister was putting on a"show" of being psychic and all New Age.  And because of the way things are turning out for Ned, being attacked by wild wolves at a local viewing point and becoming ill the nearer they go to an ancient field of battle, he urges his mum to please come and be with them as things seem to be going downhill fast.
I've revealed far too much and I feel that I haven't quite managed to pull of putting the plot together for you even after all of that!  It's just, to me, Ysabel was a great holiday read - intricate, with a wonderful setting and interesting characters.  It surprised me that it was actually in the adult sci fi / fantasy section in my local Waterstone's because Ned, as the main character, is a mere fifteen, going on sixteen years old.  So a lot of his story will resonate with teen readers too, especially if they are looking for something contemporary with a historical twist, but still a bit supernatural.  But, I hasten to add, before this puts off any adult readers - the narrative is compelling and has enough body to its bones to satisfy adult scrutiny.

This is the authorised Guy Gavriel Kay website.  Ysabel is out to be find in all good bookshops and online - especially in this very lovely cover.
Who wrote this? Liz at 8:28 am

I loved this one when I read it last year. The banter and interactions between Ned, his family and friends was one of the best things about it.

I bought YSABEL a while ago but still haven't read it yet. Enjoyed your review, as it intrigued me all over again. It was definitely clearer than the US back cover synopsis. Kay's TIGANA is one of my all-time favorite books, so if you like fantasy it's an awesome read. Although since I haven't read YSABEL I'm not sure how they compare.

I stumbled on this by chance. If you liked "Ysabel" then you must read "The Fionavar Tapestry". Kim and Dave were in that, so you can find out exactly what happened to them long ago.