You can't eat a princess by Gillian Rogerson and Sarah McIntyre 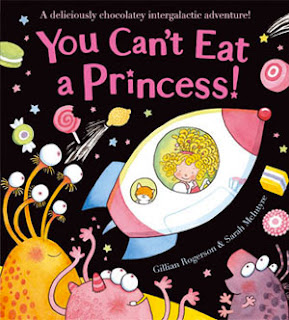 I got this from the Crystal Palace Children's Festival and I am smitten.

Princess Spaghetti is preparing for her birthday celebrations but oh no! King Cup Cake got himself abducted by a bunch of human-eating aliens.

Being a can-do kind of of princess, Princess Spaghetti takes matters into her own hands to go and find her dad as the Royal Knights are all less than dedicated. She zooms off in the Royal Rocket to track him down.

She finds him...as he's being prepared to be eaten by the bunch of scary aliens!  Using some astonishing princess skills and clever thinking, she rescues her dad, King Cupcake and once back home, she introduces the aliens to chocolate and they indeed learn that eating chocolate is by far better than eating humans.

I loved this concept from start to finish - I mean, think about it: aliens decide to kidnap a king to eat him!  Then his daughter goes on a quest to rescue him, in the Royal Rocket!  And as she's a trained and born princess, she manages to out-think those aliens and rescue her dad and she gets to have her party.

I loved it - it is beautifully illustrated by the very talented Sarah McIntyre and the story is quick and snappy thanks to Gillian Rogerson's clever writing.  It is a feel-good picture book for younger readers.  It was published by Scholastic and is available now.  I am getting a copy for my god-daughters as they are both very keen readers.  I love that the princess is so feisty and can-do.  She reminds me a lot of Kirsty and Ash.  I think, Princess Spaghetti is definitely a girl I'd like to know.  I hope that there are more Princess stories in the near future!

Thank you so much for your lovely review, I'm so glad you liked the book. When I wrote it I wanted to create a modern day princess who can do things for herself and who doesn't wait around for others to solve her problems. Sarah has done a brilliant job with the illustrations, she's so talented! I hope your god-daughters enjoy the book. I can let you know that there will be a new Princess Spaghetti story next year. Thanks again for your review.
Gillian Rogerson x

OMG! It's the author!

Hey, Gillian, first off, I want to say that the cover is just really wonderful. See, when I shop for books, the first thing I look at is the cover. If I like it, then I look at the story/title if it's nice.

With your book, not only is the cover a bonus but the content, as well.

Hurrah! Just saw this, thanks for the fab review! :D