The Bones of Avalon by Phil Rickman 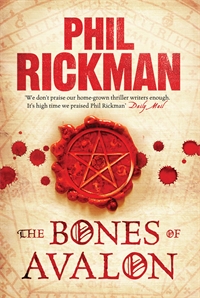 It is 1560, and Elizabeth Tudor has been on the throne for a year. Dr John Dee, at 32 already acclaimed throughout Europe, is her astrologer and consultant in the hidden arts... a controversial appointment in these days of superstition and religious strife.

Now the mild, bookish Dee has been sent to Glastonbury to find the missing bones of King Arthur, whose legacy was always so important to the Tudor line. With him – hardly the safest companion – is his friend and former student, Robert Dudley, a risk-taker, a wild card... and possibly the Queen’s secret lover.

The famously mystical town is still mourning the gruesome execution of its Abbot, Richard Whiting. But why was the Abbot really killed? What is the secret held by the monks since the Abbey was founded by Joseph of Arimathea, uncle of Christ and guardian of the Holy Grail?

The mission takes Dee to the tangled roots of English magic, into unexpected violence, necromantic darkness, the breathless stirring of first love... and the cold heart of a complex plot against Elizabeth.

I am a big big fan of Phil Rickman and his Merrily Watkins books. When Corvus Books was first launched, I pestered the good people at Atlantic Books to PUHLEASE send me Phil Rickman's newest novel on, The Bones of Avalon. That duly arrived and I read it greedily and read it again.

And yet that review never saw the light of day, till now. Because I think this time of the year is the perfect time for this fantastic historical novel from one of the foremost authors working in the UK.

Phil Rickman is a master when it comes to plotting a novel. He sweeps you along with the narrative and slowly but surely the pieces of the story comes together and suddenly, you as the reader get this lightbulb moment and you then unexpectedly totally get the story and how cleverly it is all put together. Or rather, that is my experience with his other novels.

In Bones of Avalon things are ramped up significantly. John Dee, Elizabeth's "sorceror" is called on to investigate the missing bones of King Arthur. Already you can't help but be hooked.  Such a simple pretext to get the adventure off to a start but as this is a Rickman novel, that simple hook is already far more complicated than you may expect.  Throw in powerful characterisation of historical figures and an ability to tell a story in a setting that you never for a second disbelieve, The Bones of Avalon will sweep you off your feet, shake you around a bit and spin you around.

Deeply drawing on his already extensive knowledge of the occult and hidden knowledge, Rickman works his magic by giving us a John Dee as we may never have thought to see him: a gentle, highly intelligent man in his early thirties who is probably a bit too naive for his own good.  Contrasted with him we have the charismatic Robert Dudley, who is wise, foolish and a bit dangerous to know.  The two form an odd team but therein lies Rickman's talent, giving us a main character (Dee) and a main secondary character (Dudley) who reflect not only each other, but the time the story is set in.

I can't praise Phil Rickman's depiction of Elizabethan England enough. The book oozes with mystery, fear and layers of religious strife and deep pagan roots.  But, it is also an unexpected novel in the sense that Dee's character is so novel.  I have read biographies of him in which he is always the dry haunted man, a man who is easily lead astray by colleagues and rumours.  In Bones of Avalon we have the bookish young man to contend with - someone who is brave without swinging a sword or facing a knight in battle.  His bravery is quieter yet it will shake the foundations of the small town of Glastonbury and surrounds, right to London where his Queen resides.

I am loathe to tell you more of the plot as it is a) involved and b) trying to explain the ins and outs will be too spoilery but allow me to say that if you enjoy in depth characterisation, good storytelling and an evocative historical setting, you should enjoy Bones of Avalon.  On par, and better than many of the contemporary written historical novels out there today, Phil Rickman has proved that he is an excellent wordsmith with a deft touch when it comes to writing about historical figures.

Find Phil Rickman's website here and Corvus / Atlantic Books here.
Who wrote this? Liz at 8:01 am