When I was Joe by Keren David 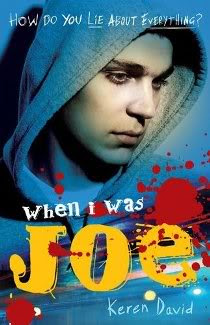 When Ty witnesses a stabbing, his own life is in danger from the criminals he's named, and he and his mum have to go into police protection. Ty has a new name, a new look and a cool new image -- life as Joe is good, especially when he gets talent spotted as a potential athletics star, special training from an attractive local celebrity and a lot of female attention. But his mum can't cope with her new life, and the gangsters will stop at nothing to flush them from hiding. Joe's cracking under extreme pressure, and then he meets a girl with dark secrets of her own.

Wow - what a corker of a book.  The storytelling is ace but it is Ms. David's characterisation here that pulls us as readers into Ty/Joe's story.

We are thrust into Ty and his mum's lives during an unpleasant time.  Joe was a witness to a knife crime and he told the police about it.  And everyone knows that this is not something that happens - hence the family being taken into care by the police for protection.

Under their new identities they should be safe.   The operative word here is "should" because there is no mollycoddling in Ms. David's world.  Joe and his mum are not glamourous people from CSI or from any other glossy tv show.  They had to leave their entire lives behind and go on the run and hope that they remain safe. Can you imagine doing something like that?  I can't - no contact with your friends and family, cut off from the world as you know it.  And worst of all is the fact that no matter what you do, you must try and keep under the radar because if you don't, there is no telling what might happen.

I genuinely fell for Ty.  His struggles became my struggles - will he cope at his new school today, will he remember to be Joe?  Will he remember to keep it on the down low and to not be noticed by anyone, including the teachers.  Hard enough to do in a normal situation, even harder still when you are purposefully trying to disappear!

His new friendship with a paraplegic girl, Ellie, raises all sorts of problems.  Ty already has so much to remember about his new life, and should he reveal to Ellie what's going on, her life may end up in danger too.  Ty is not a born liar, he finds being secretive hard.  Initially it's quite cool - a bit of James Bond going on, a bit of Goodfellas and that, but the reality of it is that lying and lying all the time, is very hard and it takes its toll.

Ty's personality permeates the book - he's moody, annoyed at the ruckus, irritated by his mum but he's also trying to make the best out of a bad situation.  As the story plays out, I find myself squeezing my eyes shut on occasion thinking: any minute now, any minute now it's gonna happen, he's going to blab.

The author has tackled a deeply disturbing and very prominent aspect of crime in the UK - that of knife crime.  It's not going away - no matter what the reports say.  And it is in this reality that When I was Joe is set.  It doesn't shrink back from the awfulness of the matter, it's not made glossy or glammed up either.  It is what it is, a dark gripping novel written by an author who has such great skill, that I'm impatient to get to the follow-up novel: Almost True.  Which I will review next week, when I'm back from holiday.

Find Keren David's website here.  When I was Joe is out now from Frances Lincoln publishers.
Who wrote this? Liz at 8:30 am

I loved reading your review, and I completely agree that this is an extremely gripping novel. The sequel is fantastic too and I'm looking forward to reading your thoughts on it!

this sounds like an interesting one. Damn you, my tbr is already two bookcases deep.

What happened to your Firelight review?....

Sorry Cherry! I published it instead of scheduling it. It'll be up tomorrow.