A Year Without Autumn by Liz Kessler 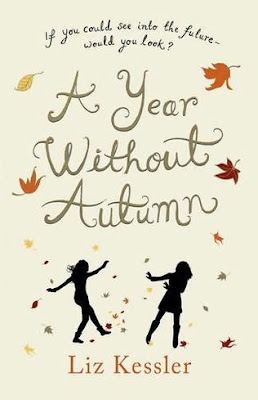 If you could see into the future - would you look? Jenni Green doesn't have a choice. On her way to visit her best friend, Autumn, Jenni suddenly finds she's been transported exactly one year forward in time. Now she discovers that in the year that's gone by, tragedy has struck and her friendship with Autumn will never be the same again. But what caused the tragedy? How did Jenni skip a year? And can she find her way back to the past to try to change what lies ahead? With humour - and her customary light touch - the author of the EMILY WINDSNAP books plays a fascinating game with time, and explores the changes that take place in friendships and families in the aftermath of a disaster.

I received a copy of A Year Without Autumn by Liz Kessler a little while ago and picked it up on a whim as I've not read a time-slip novel for the longest time.

What struck me immediately was Jenni's voice.  It was fresh, funny, vibrant and real.  Even if she comes across as not the most forceful of people there was a quality to her that really appealed to me as a reader.  She's the side-kick character, really.  The one who follows, not the one who leads.  And yet, Ms. Kessler has really worked hard to create a character that all of her readers could identify with.  We experience her relationship with the far more vivid and vibrant Autumn first hand - here is a girl meant for bigger things, you think to yourself, of Autumn.  She's going places and combined with her equally glamorous and arty parents, we know we're going to see Autumn as the next fashion designer or artist du jour when she is older.

But then, unexpectedly, things change horribly.  On the day Jenni and Autumn are set to go horse riding whilst on holiday, Jenni takes the old rickety lift up to Autumn's apartment and somehow falls between time.  Things are very different when she steps out.  It is a year later and things are awful.  Some terrible event had happened in their personal lives and for the longest time, we follow Jenni around as she desperately scrabbles to make sense of what's gone wrong.

There is a wild change in Autumn and the relationship between the girls has changed too - Jenni is now in the role as carer for Autumn, or rather, that is what is implied by everyone else.

Jenni feels like she is going mad, trapped in this alternative reality where Autumn and her parents' lives have changed so awfully.  And what's happened to them also affected Jenni and her own parents.

It is difficult to explain the rest of the plot as it will give too much away, but I can honestly say that Ms. Kessler keeps such a tight reign on the storyline that you can't help but suspend your disbelief and be swept up in the story.  There were some instances where I was very sure Jenni was losing her mind and that she had become this unreliable narrator.

Jenni's character goes through this tremendous character development from the quiet, shy, reticent one to the girl who takes charge of a situation and almost through sheer will of character and inner strength, reforms what has gone before, to fashion something far better.

I was in tears, at the end of the novel.  Because I was so relieved the way things turned out.  It worked well and the ending made sense and it was great to see how the various strands actually came together through an author's great manipulation.  I'd recommend this for younger readers of say 9+ but I'd also recommend it to aspiring writers who would like to read an intricately plotted novel that promises a great deal but then also actually delivers.

A Year Without Autumn is my first ever Liz Kessler book.  It will not be my last.

Find Liz's excellent blog here.  A Year Without Autumn will be released on 7th April in the UK through Orion.
Who wrote this? Liz at 8:51 am

What an absolutely fantastic review. I will definately be looking for this one for the 10 year old and myself to read. Thank you

Amazing review. I completely love the sound of this book. I love books that slip in time like this. Awesome.

Oh my god, what a great review. I hadn't heard of this book before and now it's immediately being added to my wishlist!

Great review! I have this book to read, but I might just bump it up my pile! :]