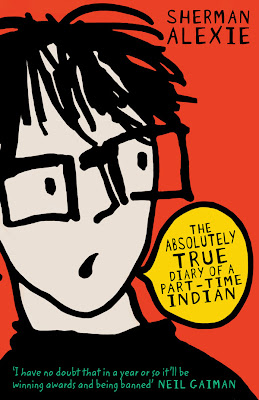 In his first book for young adults, bestselling author Sherman Alexie tells the story of Junior, a budding cartoonist who leaves his school on the Spokane Indian Reservation to attend an all-white high school. This heartbreaking, funny, and beautifully written tale, coupled with poignant drawings that reflect the character's art, is based on the author's own experience and chronicles the contemporary adolescence of one Native American boy as he attempts to break away from the life he seems destined to live.


Illustrated in a contemporary cartoon style by Ellen Forney.

Like a lot of readers of kids' fiction in the UK I have been aware of this book for some time.  I didn't think about picking it up until The Booksmugglers went and reviewed it and basically made me want to move heaven and earth to read it.  I bought it in and it took some time for me to get to it.

And when I did, I read it one single day.  Several sittings, but one day.  I even annoyed people on Twitter by tweeting about it. Constantly.

I loved Part-time Indian because of the author's voice.  Or rather, because of Junior's voice.  It was so frank and true and honest and above all laugh-out-loud funny, that I never ever for a moment doubted what I was reading.  I became so involved with his story that I sat at work, by myself, as no one else was in, and cried and laughed like an unhinged person.

Junior's trials and tribulations reminded me a bit of Diary of a Wimpy Kid but where Wimpy Kid is set in suburbia with suburbia problems, in Junior's story he has to deal with alcoholism, poverty, bullies, prejudice and blatant racism.

It sounds awful, and it is.  Sherman Alexie does not shy away from these subjects. And as much as he highlights them, and doesn't baulk from the reality living in a world that seems as harsh as it is, it is Junior's matter of fact, almost stream of concsiousness telling that keeps the story from becoming tedious and a misery memoir.  He tells freely of his life growing up on the reservation and his subsequent escape to the nearby town's "white" school where he is looked upon initially as this weirdo freak Indian kid.

Slowly but surely, he's accepted as part of the school community, especially when it turns out that he's a good basketball player.  His inclusion in the team made me fistpump the air and his subsequent friendship with the coach rang wonderfully true.  I liked the fact that the secondary characters showed true emotion and that especially the adults in the book weren't just there as decoration.  Again, especially the coach of the basketball team.  I liked that there was no easy way out - that his inclusion in the team didn't suddenly mean that his life was okay.  It didn't change the fact that he came from a very poor family.  It didn't change the fact that his parents were both alcoholics.  But what it did change was Junior.  He grew wonderfully as a person and reached a maturity level that made him realise a great many truths about his life, where he comes from and where he's going.  This is one of those truly rare books that although the subject matter is amusing because it is told in a funny way, it deals competently and cleverly with a lot of issues people would rather not think about.  But in the end, there is this great sense of elation and life affirmingness to it, and you can't help yourself: you want to run up to someone and hug them.

I cheered and laughed and cried. I cannot recommend this book enough to you to go out and buy or borrow from a local library.  It has within a few hours, whilst reading it, become one of my desert island books.

The Absolutely True Diary of a Part-time Indian by Sherman Alexie has been out for ages and ages and it should be everyone's required reading. This is the review from The Booksmugglers that made me want to go buy it.  Read it, because they give some excerpts from the book along with a video of Sherman Alexie reading a piece and talking about the book during an interview.
Who wrote this? Liz at 8:51 am

I am grinning like crazy right now, SO glad you liked it as much as I did!

Some hard hitting topics covered in this book. It has such fabulous reviews though.

I really, really want to read this one (being Native American myself and hearing stories about my mother's childhood living on a reservation in particular make this one a book I've been looking out for for awhile). I've heard fantastic things about it, but have yet to find a copy for myself. I do have another book by the same author, The Lone Ranger and Tonto Fistfight in Heaven that I'm hoping to get around to very soon!

I'm going to step up my efforts to locate a copy of this book! Great review.

Thanks for your recommendation. It sounds interesting, at least from your review.