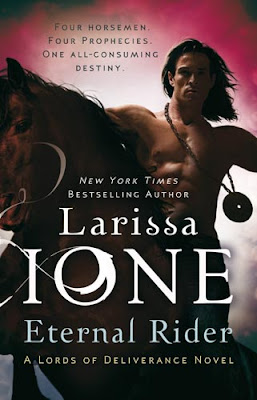 The prophecies were there but no one listened. Until now. They are the Lords of Deliverance and they have the power to usher in Doomsday . . . or prevent it.

His name is Ares, and the fate of mankind rests on his powerful shoulders. If he falls to the forces of evil, the world falls too. As one of the Four Horsemen of the Apocalypse, he is far stronger than any mortal, but even he cannot fight his destiny forever. Not when his own brother plots against him.


Yet there is one last hope. Gifted in a way other humans can't - or won't - understand, Cara Thornhart is the key to both this Horseman's safety and his doom. But involving Cara will prove treacherous, even beyond the maddening, dangerous desire that seizes them the moment they meet. For staving off eternal darkness could have a staggering cost: Cara's life.

I have not read paranormal romance for the longest time but I knew of the author, as I follow her on twitter (@larissaione) and I know she has a lot of dedicated fans. Also, I am very much missing Supernatural (tv show) and subsequently thought I'd give Eternal Rider a whirl and boyo, what an incredibly ride it was.

Firstly, what is apparent right from the start is the amount (and quality) of world building that Ms. Ione had done for her series.  The Lords of Deliverance is her second series, her first being the Demonica series.  So she already has this intricate world that she's already built up for her characters.  The rules have been set and the mythologies and boundaries have been drawn.

The reader (me in this instance, having no previous knowledge of her Demonica books) is thrown in to the heat of things, right from the start of the novel.  We meet Ares, one of the soon to be Four Horsemen of the apocalypse.  As the product of a union between Lilith (a demon) and an angel, at the dawn of time, Ares and his siblings are cursed (after wreaking havoc on earth) to usher in the Apocalypse once their Seals are broken.

And each of their Seals happens to be different. And in Ares's instance, his seal through various machinations, becomes closely tied with a modern day young mortal woman, Cara's, life.  The book is populated with a strong secondary cast, characters whom I suspect are from the Demonica books.  It didn't bother me in the slightest - I felt that my reading experience was uncluttered and as I was new to the world, I had no preconceived ideas and found finding out about Ares, his brother Thanatos (Death) and his sister Limos (Famine) and the other one, Reseph (Pestilence) was great fun.  (There is a reason why Respeh/Pestilence is the "other one").  But you'll have to read Eternal Rider to find out why.

I felt - this is going to sound weird - cushioned by all the back story what had gone before.  I found myself completely suspending my disbelief as I had confidence in the author to spin me a great yarn.  And that she does by the bucket load.  The relationships she describe between these immortal beings and how they fit in in the scheme of things left me keen to read the next novel in the series.

There is no info dumping - or if there was, I honestly can say I didn't notice it.  Everything remained tight and within the context of the story.  Ares's character is so serious and so deeply brooding, as it befits the lord of War, that when Cara occasionally gets the better of him, you can't help but applaud her.  He is a wonderful alpha male character and I loved how Ms. Ione portrayed him as this wild unpredictable force who has this internal compass of right and wrong that guides him.  He knows his strengths and his weaknesses and as all good war leaders, he adapts and strengthens his battle plans as things go awry.

There are some knee-melting love scenes between Cara and Ares so this is definitely not for younger readers.  And whilst the love scenes are great, they don't go on for pages and pages and pages, until you want to skip them.  Instead, they are written with even more control than the rest of the narrative and the writing goes a bit...lyrical and poetic and I loved it.  It honestly fitted the context of the storyline and I liked that both Cara and Ares had the strength and capacity to be moved by this intense relationship that sprung up between them.

There are several strands to the plot and honestly, by tugging on one in the review, more will be given away that I feel is fair.  So, trust me when I say that the synopsis above, taken from the Piatkus site, covers maybe  the tiniest bit of what happens in Eternal Rider.

And if, like me, you've not read a paranormal romance for a long time, and you feel in the mood to get your toes wet, give Eternal Rider a try.  Or, if you've never tried one, and you wonder what they're about, this is a good place to start.  A lot of what Ms. Ione does with her scene setting, characterisation, background and plot is far superior to what I've read in the past and I won't hesitate recommending this.  It's sexy, hot blooded, clever and funny, with great big lashings of supernatural beings and a larger than life cast that is more than up to the high concept of the series.