The Thirteen Treasures by Michelle Harrison 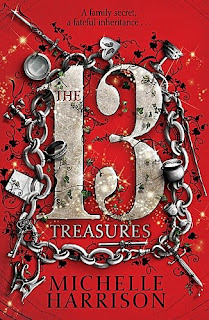 While visiting her grandmother's house, an old photograph leads Tanya to an unsolved mystery. Fifty years ago a girl vanished in the woods nearby - a girl Tanya's grandmother will not speak of. Fabian, the caretaker's son, is tormented by the girl's disappearance. His grandfather was the last person to see her alive, and has lived under suspicion ever since. Together, Tanya and Fabian decide to find the truth. But Tanya has her own secret: the ability to see fairies. And, after disturbing an intruder in the night, it emerges that someone else shares her ability...The manor's sinister history is about to repeat itself...

Firstly, I loved the cover, illustrated by Christopher Gibbs. The picture of the charm bracelet really hit the right spot. I love charms and talismans and really believe in their secret powers. (Yes, even expensive Links of London charms are imbued with that magical something).

Also, the line at the top of the front cover – A family secret, a fateful inheritance...

You just cannot go wrong with the look and feel of this, at all.

The novel introduces us to Tanya who has some issues, apart from being harassed by fairies, her mother believes that she is being particularly difficult (mostly because of the pranks the fairies play), therefore sending her off to live with a grandmother she’s never warmed to in a manor house that can be described as gloomy, at the best of times.

I found the novel a bit self-conscious to start with, there was a hesitancy there for the first few pages, but once the author gets into the swing of things, Tanya’s adventure is full blown and it is a hairy one!

Her life at the manor house is stilted – there is no warmth from her grandmother, her days are spent avoiding the forest outside the door and trying not to draw the attention of Fabian, the grounds keeper’s son. Fabian is an interesting creation and I found him very well drawn, with insecurities a mile long, a stubbornness and a weirdness, that was both endearing and a bit alarming.

Together Fabian and Tanya unravel the story of the girl that went missing in the forest, all those years ago. Fabian feels harassed by its memory – it’s directly affected his family, turning his grandfather, Amos, into an unpleasant old man, locked away on the second floor of the manor house.

Throw in Fabian’s dad who watches them with an eagle’s eye, warning them to stay out of the forest, toss in the rumours of the hidden tunnels that run from the manor house into the small adjacent town, add into the mix mysterious disappearances of very young children in the area, pinch in a Tanya’s own second sight ability which is both a curse and blessing, stir in the mystery surrounding the original owners of the manor house, fold in the weird gypsy lady who lives in the forest whose presence is a constant reminder that all is not well in the area, place in the oven and bake to perfection until you get a book with several ingredients, pulling together to make a hearty satisfying read.

I enjoyed it – I thought it was satisfyingly dark with the author reworking the Victorian image we have about fairies, shining a new light on them, their courts, making them a bit more sinister, turning them into proper adversaries to go up against Tanya and Fabian.

So much goes on in this novel that I can’t even begin to put it all together into this review as it will spoil the fun you will have reading it.

The Thirteen Treasures were published by Simon & Schuster earlier this month. Find the author’s site here.
Who wrote this? Liz at 5:11 pm