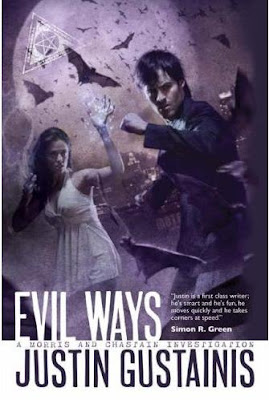 In a story that ranges from Baghdad to Los Angeles, EVIL WAYS sees eccentric billionaire Walter Grobius attempt to unleash a devastating magical apocalypse. Quincey Morris and his partner, white witch Libby Chastain, are drawn into their deadliest case yet, but from different directions. In Los Angeles, Quincey is blackmailed by the FBI into investigating a series of ritualistic child murders. In New York, Libby barely escapes an attempt on her life by assassins armed with magical weapons. Both of these threads eventually intertwine, leading the investigators to a conspiracy so vast and diabolical as to defy belief.

The final, bloody confrontation takes place at Grobius’s isolated Idaho estate, on Walpurgis Night -- the night of the Witches’ Sabbath. Quincey and Libby, and their allies, must fight a desperate battle against immensely powerful dark forces that threaten the future of all mankind.

Libby and Quincy are back – against their will, admittedly, but adventure waits for no man...or white witch.

White witches are being killed across America for sinister reasons. And yet again children are going missing with parts cut from them. This time around it’s not “muti” murders as in the previous novel by Mr. Gustainis, it is something even more awful.

I fell under Libby and Quincy’s spell when I first read Black Magic Woman (click for review). The urban fantasy setting felt very real, set in modern times, where few people knew about the occult, wizards, magic or supernatural creatures. The action was raw and mean and people got hurt and there were repercussions. I looked forward to the new novel and am happy to say I was not disappointed.

Evil Ways trots out our occult investigators, setting them up on a ride all around America to figure out who has been killing the witches and abducting children and cutting them up. Quincy is approached, yet again, to work alongside the FBI’s BAU but this time around, he doesn’t have to really spend time quantifying supernatural things happening – the agent in charge, Fenton, has come to realise that there are things in the dark that go bump in the night. Even his superior officer calls cases like this the “woo woo” cases.

The fact that there are “woo woo” things happening and that the authorities were semi-aware of this, changed the perspective of the novel a bit. Especially when it turns out that Fenton’s new partner is a bit more than just a clever gall who can shoot straight.

What made me chuckle is that everyone’s favourite Chicago wizard gets a mention in the novel and a few scenes take place in said wizard’s local pub. The two worlds overlapping was done flawlessly.

The plot twists and turns as we follow the two “couples” investigating various end of the enigma. There is a lot of harsh language, tough descriptions and some things that made me wince and pull a face. Evil Ways is not, in any shape or form, a comfortable urban fantasy read. It describes the other side of the fence, the one that doesn’t really care about werewolves or pretty vampires, but focuses more on the evil that men do – to others and to themselves. It is a lot more gritty than most UF out there and it may put some readers off but for those who like Mike Carey and David Devereux amongst others, should add Justin Gustainis works to your TBR pile.

The rapport between Quincy and Libby is good, as it is between Fenton and his new female colleague. In some instances it is almost Whedonesque and made me grin.

The bad guys in the novel made me scratch my head – I did not like them or what they were doing and how they went about doing it was not pleasant. But, contrary to some readers, I enjoy reading about bad guys. The bad guys in Black Magic Woman rang true and made me cringe, the baddies in Evil Ways were pretty awful BUT I did not feel like they could step off the page and do me damage. They did not push me outside of my comfort zone – maybe I’m just odd? – and I found I enjoyed a new female character which the author brought on as muscle and protection for Libby and Quincy, a lot more. I initially thought she was one of the antagonists and cheered for a truly bad girl. Her motivations are not immediately clear, but I did find her character very interesting. I hope to see more of the “Widowmaker” in future novels. There are depths there that can do with exploring.

Find Justin’s website here and I’ve found an online link here to some free excerpts, which I’m sure you’ll enjoy reading.
Who wrote this? Liz at 4:32 pm

i so want this book. Every review I read just makes me more determined to have it.