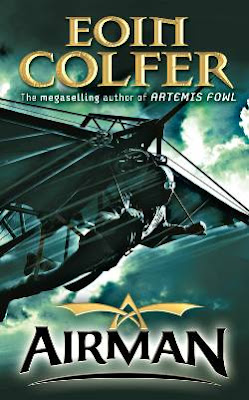 I’ve not had a chance in the past to read any of Eoin (pronounced Owen) Colfer’s books but I know he is tremendously popular and a good writer. I approached Airman with bated breath, not sure what the expect and found myself swept off my feet in this Jules Verne / Alexander Dumas / William Golding type novel of hardship, self-realisation, revenge and obsession.

The main character, Conor Broekhart is born at the World Fair (1878) in a hot air balloon sailing over Paris. This introduction to Conor tells you immediately that our young hero is not going to be your run of the mill type of lad. His parents return with him to the small Saltee Islands, just off the Irish coast, where his parents are friends with and the subjects of King Nicholas Trudeau, sovereign of the Saltee Islands. King Nicholas is however a forward thinking monarch, ensuring that the islands are dragged out of their medieval ways into modern times, making them adapt to industrialization. This is not something certain of his subjects agree with! The money for the changes comes from the diamond mine on Little Saltee Island.

Conor spends most of his time with his best friend, Princess Isabella and his tutor Victor Vigny who is as obsessed as Conor is with flying – it is what their experiments are all about. Victor is a good friend of King Nicholas and they have an easy cameraderie. Marshall Bonvilain (good name, eh?) is the villain of the piece, the man who is keen to overthrow King Nicholas and take the throne for himself. Needless to say, he succeeds in his attempts, catches young Conor sneaking about trying to help his King and in an amazing about face, young Conor is trussed up as a traitorous soldier, renamed as Conor Finn and tossed in jail – and the story is set out that the real Conor died a hero, trying to save his King.

The story is wonderfully told with great skill and tremendous characterisation. Conor is highly intelligent, adapting to his new surrounding and his new persona. Old Conor was honourable and had a dream. New Conor is less scrupulous and with the help of a cellmate Linus Wynter he learns the ropes of prison life. A lot happens to Conor whilst he is in jail. He grows up and he becomes wise. He goes through an emotional time, thinking of his family, of the Princess Isabella, soon to be Queen Isabella, and what his future might have been. He instead focusses on who and what he is now, putting his past behind him. It makes for fascinating reading and I was dreading that it was going to be a dull period in the book, but the author uses his skill as narrator to bring the wider picture into play, so you don't JUST focus on Conor's dilemma.

I am not going to tell the whole plot, as it wouldn’t be fair. There are surprises and twists aplenty and it is truly a boys own adventure. Let me say this though: if you are keen for a historical romp, some brilliant storytelling about a young man seeking his revenge, and how your dreams keep you alive, Airman is that and more. As I mentioned earlier it has an old-world storytelling echo to it. It is The Count of Monte Cristo for younger readers. It is the romp of Princess Bride and it is the imagination of Jules Verne and HG Wells all rolled up in one. I will give this one of my newly created tags:

– and encourage you to read it, just for the heck of it, because it is good clean escapist fun and it made me realise I need to definitely catch up with Mr. Colfer’s other works! I’d also hasten to add that I think this one will have cross-over appeal to adults as the world-building and storytelling is just excellent.

Airman’s just been published by Puffin in the UK so it is readily available to buy / borrow from a library. Find Eoin Colfer’s site here and the Puffin website here .
Who wrote this? Liz at 11:34 am

Anyway another good review from you.

Hi Liz, I've read all of the Artemis Fowl books and thoroughly enjoyed them. However I have had Airman sitting in my never dwindling to read pile next to the bed for ages and somehow something else has always been first choice. After reading your review it may finally creep to the top and see the light of day!
PS My book a day prize arrived safely thanks so much.