The Lost Art by Simon Morden 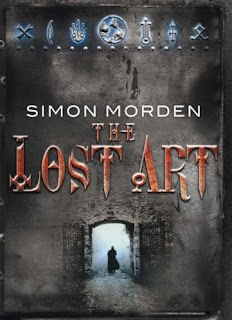 A millennium after the formidable war machines of the User cultures devoured entire civilisations and rewrote planetary geography, Earth is in the grip of a perpetual Dark Age. Scientific endeavour is strongly discouraged, while remnant technology is locked away - hidden by a Church determined to prevent a new Armageddon.

This is the world to which Benzamir Michael Mahmood must return. A descendant of the tibes who fled the planet during those ages-old wars, he comes in pursuit of enemies from the far reaches of space. The technology he brings is wondrous beyond the imaginings of those he will meet, but can its potency match that of the Church's most closely guarded treasure?

For centuries it has lain dormant, buried in a lead-lined tomb deep beneath the flagtones of a remote Siberian monastery. But it is about to be unearthed, and the powers that will be unleashed may be beyond anyone's capacity to control. Even a man as extraordinary as Benzamir . . .

Former warlord and assassin-turned-Monk Va and brash, smitten princess Eleyna set off to get them back. Meanwhile, mysterious Benzamir and a couple of desert locals set off in search of Benzamir's enemies. The two groups come together and find that their goals are far from mutually exclusive.

I have conquered my fear of sci-fi novels...thanks to The Lost Art by Simon Morden. I had no inklinkg it was going to turn sci-fi on me as I started reading it (this happens when you read as I do, i.e. go in "blind") and far from making me run for the hills, I found myself getting crabby when my reading got interrupted. I liked the world, I liked the setting and appreciated the tremendous world-building the author did. (The author, by the way, is a bona fide rocket scientist!) And I also liked the characters, Va, not so much but definitely enjoyed the spirited, intelligent and down to earth Princess Eleyna and the star man Benzamir.

The setting is rich and as the plot and story unfolds you get lured in. I would suggest the novel is perfect for older or really enthusiastic readers who will not be put off by coping with learning that the world as we know it has been turned on its head - no really! Before you wonder what I'm on about - TLA by Simon Morden is published by Random House Kids under their Corgi Children's imprint. The age bracket is around 12+ which I would say is correct, although, having said that, the novel does deal with some pretty intense science and the subject matter is quite mature.

As I mentioned, I did not really like Va's character - he was too abrupt and too rude - mostly to his travelling companion Eleyna. He is a very haunted and internally conflicted character and I think the author had good fun writing him. Although, in part, he is a hero in this novel, he is also to an extent the anti-hero because the characteristics of a hero, that of being brave, solid, trustworthy, honest, is taken that one uncomfortable step further in Va's case, turning him into a truly dangerous person, someone who has no regard for his own safety or for those around him. Va represents the old ways, the unswerving ways and is as stubborn as an ox. His faith guides him. A true paladin. He forges ahead, no matter what.

Benzamir on the other hand is the Renaissance man - a wanderer, seeker, a scholar and a fighter, but a thinker at the same time, puzzling out the story of his enemies and that which is currently happening on the planet his tribe once called home, all those many years ago. I thoroughly enjoyed travelling with Benzamir and his friends in their quest to find the lost books and piecing the story together. The author writes his set pieces with a vivid style - you can taste the dust and sand of the markets near the pyramids, you can feel the unrelenting heat beating down on you. In this instance you cannot fault the storytelling.

The Lost Art is a good solid read - an unexpected pleasure (as I'm not good with steam punk or sci-fi but I'm amending that this year!) and a book I would recommend to readers, but with a caution: although it is cited being for kids, it is not a childish book. So its intended audience may struggle to come to grips with some parts of it, but, if like me they persevere they will be rewarded with a thrilling ride.

The Lost Art was released in the UK July 08 by Corgi. You can find Simon Morden's website here.
Who wrote this? Liz at 3:11 pm

After reading the first part of the synopsis I thought by myself: "Oh, a kind of steampunk novel, with a dahs of post apocalypse and some historical flares. Not bad!!" I also got intrigued by the character Benzamir Michael Mahmood.

The author "is a bona fide rocket scientist!"
Hey! that must be an omen.
Just read edifanob backwards and you get voi la bona fide !!

After reading the synopsis I didn'texpect that the age bracket is around 12+.

Anyway youd did the impossible.
I will change my 2009 book list which mostly contains of fantasy and steampunk plus Harry Dresden AND I WILL ADD A SCF-FI NOVEL.

Now I have to think whether I shall visit your blog again or not because with your choice of books and your reviews you have influence on my book list :-)) Nope,that was a joke.

Of course I will come back again. Today is the 9th day of 2009.That means there are only 356 opportunities left to change my book list for 2009.

Ah, this is a weird titles and I think I will have to add it to my own list of books to conquer. Quite awesome that you managed to get past your fear of sci-fi. I did that with Ursula LeGuin. Her Hainish cycle is the best ice breaker between fantasy and sci-fi as the former genre melts finely into the second without you noticing. I was quite surprised, when that happaned. I have to note that the sci-fi was light, even though technology was present.

Anyways I am still puzzled... What si teh lost art?