The Tomb of Hercules by Andy McDermott 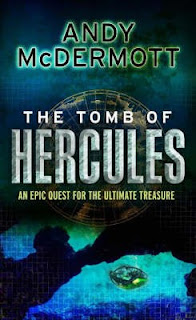 Finding Atlantis was just the beginning...

The stunning sequel to THE HUNT FOR ATLANTIS sets Nina Wilde and Eddie Chase on another dangerous quest - to find the tomb of the legendary Greek hero Hercules, reputed to hold the greatest treasure in history. But there are others who want the contents of the tomb for their own malevolent purposes, and they will go to any lengths to get it...

The Tomb of Hercules should come with a warning message: Extreme Nonstop Action.

The book is insane, the pace is not something I've ever come across. You know when you feel pummelled on behalf of the characters in the book that you're reading is pretty intense.

Nina and Eddie are thrown in the deep end - Eddie goes off to rescue his ex-wife Sophia, leaving Nina exposed to some serious trouble. Nina finds herself on the run tied to a valuable manuscript. Eddie's in Singapore getting shot at, rescuing his ex-wife from an abusive husband. It so happens that their respective running, fighing and being shot at on two different continents, has one thing in common, the Tomb of Hercules.

The action is adrenalin pumping, as Eddie and Nina are crossed, double crossed, saved, tripple crossed, accused of assasinating a high ranking African official, shot at some more and blown up. Very cinematic sequences written with a good eye, which I really enjoyed.

Whilst all of this is happening, we get to examine Nina and Eddie's rapidly declining relationship. They bicker, argue and fight like cat and dog. It's nasty stuff, very real life and not for the faint-hearted. I think if Andy McDermott feels like he needs to branch out from writing adventure quests, he'll find a good market at writing guy-lit (the opposite of chick-lit, naturally).

The couple are racing against the clock, held captive, to try and decipher the ancient manuscript and cryptic clues left behind relating to the lost tomb of mythical Hercules.

A thoroughly enjoyable ride all over the world on an epic scale. You do not need to have read the first novel, Hunt for Atlantis, as you get caught up pretty quickly with what had happened, leaving you free to thrill to the current adventure.

Two more novels by Andy McDermott are in the works - The Secret of Excalibur (already published in hard back) and The Covenant of Genesis (coming in November 09). Find Andy McDermott's site here and my review for The Hunt for Atlantis here.
Who wrote this? Liz at 9:11 pm