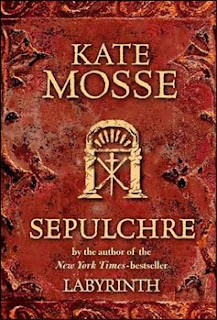 In 1891, young Léonie Vernier and her brother Anatole arrive in the beautiful town of Rennes-les-Bains, in southwest France. They’ve come at the invitation of their widowed aunt, whose mountain estate, Domain de la Cade, is famous in the region. But it soon becomes clear that their aunt Isolde—and the Domain—are not what Léonie had imagined. The villagers claim that Isolde’s late husband died after summoning a demon from the old Visigoth sepulchre high on the mountainside. A book from the Domain’s cavernous library describes the strange tarot pack that mysteriously disappeared following the uncle’s death. But while Léonie delves deeper into the ancient mysteries of the Domain, a different evil stalks her family—one which may explain why Léonie and Anatole were invited to the sinister Domain in the first place.

More than a century later, Meredith Martin, an American graduate student, arrives in France to study the life of Claude Debussy, the nineteenth century French composer. In Rennes-les-Bains, Meredith checks into a grand old hotel—the Domain de la Cade. Something about the hotel feels eerily familiar, and strange dreams and visions begin to haunt Meredith’s waking hours. A chance encounter leads her to a pack of tarot cards painted by Léonie Vernier, which may hold the key to this twenty-first century American’s fate . . . just as they did to the fate of Léonie Vernier more than a century earlier.

Reading Kate Mosse’s work is a joy. I was swept away by Labyrinth, her first published novel and couldn’t wait to read her second novel, Sepulchre. Having said that, it was not something I wanted to rush so due to other books on the TBR pile I set it aside – and every now and again I would eye it up and it would eye me right back.

Then, over Christmas, I had my chance. I was off for two weeks with nothing to do but read. So I did. I left Sepulchre to be my last and gave myself four days to read it. I read it in two. And I was going slowly.

The main character of the novel, Léonie Vernier, is brilliantly sketched against the background of a Paris heaving with artists and musicians, where the bohemian lifestyle grates on those of the more staid persuasion. She young, passionate, deeply caring, highly intelligent and prone to reading Poe and other exciting novels whilst her brother, Anatole, is more interested in his antique books. But Anatole has a secret, one that causes him great pain, and he has plans to leave Paris for a while, thinking about using his young sister, Léonie as an excuse. When Léonie is unexpectedly invited to visit her aunt in Domain de la Cade, serendipity seems to be on his side and he tags along for the visit.

They travel to Rennes-les-Bains and this is Léonie first trip this far from Paris and her observations and reaction to the countryside and those they meet, are kept fresh and interesting. To their utmost surprise Rennes-les-Bains turns out to be anything but the backwater town in the mountains they expected. The manor, Domain de la Cade, is a treat to read about – it sounds beautiful, sad, sinister and perfect as a stage for the story to unfold.

Léonie’s discovery of the book on tarot enhances the sense of drama and this feeling of jittery excitedness and concern creeps over you. At a dinner party, one of the guests, Audric Baillard, chats to her about the tarot, how dangerous they are, tht she should never try to find their hiding place as they could release an evil so terrible, it could lay waste to everything. Slowly but surely she pieces bits together about the tarot, the sepulchre that is said to be a place of great evil, the legends about the surrounding countryside, and the truth about the secret Anatole is keeping from her.

In modern times we meet Meredith Martin, musician and researcher visiting France in search of finding that extra bit of information on Claude Debussy. We follow her around a Paris that is described with great familiarity. She attends a tarot reading, on sheer impulse. This scene, for me personally, is the turning point in the novel – wonderfully written, understated and if I didn’t own around nineteen decks of tarot cards already, I would be out there choosing my first set! Meredith makes her way to the Domain de la Cade, in search of her own family’s history and stumbles across a newly refurbished hotel, still wonderfully evocative and steeped in the legends of the surrounding area.

I devoured the book – although I liked Meredith, I really enjoyed Léonie’s part in the novel more. Probably because her perspective on everything that is happening is so fresh and new. She develops from a lovely, impulsive child into a steadfast young woman of great courage and impeccable character. Meredith’s journey in the book is no less interesting, but I think because Léonie’s story is the pivotal one, I found myself keen to find out what happened.

Before I gab on too much and you get bored with my gushing, allow me to say that this is a brilliant read – written with great style, well researched, informative, fun to read (tres important!), with twists and turns, duels, murder, paranormal happenings, two interesting heroines and a very satisfying ending.

Find the author, Kate Mosse’s website here. She has the opening chapter of Sepulchre on her site, along with information on Labyrinth, her first novel.
Who wrote this? Liz at 1:52 pm