Skin and Bones by Tom Bale 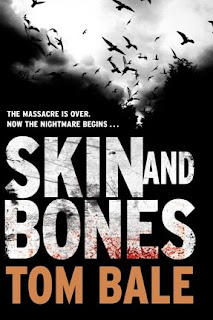 On a cold January morning, a nightmare awaits in a small Sussex village. A deranged young man goes on the rampage, shooting everyone in his path before taking his own life. It is a senseless, tragic event, but sadly not an unfamiliar one.

At least, that’s what everyone thinks.

Only Julia Trent – believed to be the sole survivor - knows there was a second man involved. But after being shot and badly injured, her account of the massacre is ignored.

But she cannot let it rest there. Together with Craig Walker, the journalist son of one of the victims, Julia sets out to find the truth. As they peel back the layers of a dark and dangerous conspiracy, they discover the slaughter didn’t begin on that bitter day in January. And worst of all, it won’t end there…

The novel was such a good read - as it is set in the UK, in the South East and very true to the society we currently live in. I recognised some of the places described, having been there in the past on visits. There is nothing like reading a book, like Skin and Bones and feeling that uncomfortableness, that connection with place, because things seem almost too close to home.

The book starts with the big event; opening in the village where the main character Nina, arrives, very early in the morning, to clear out the house her parents had lived in. From the first paragraph you know something's up. The opening page is brilliantly written (unpublished writers go check it out) and before I knew it, I was drawn in and I had to finish the novel. I started reading this at around eight at night (on a Friday) and went to bed at 3am, having read it in one fell swoop.

The events run cinematically, as Julia realises things are too quiet in the sleepy village. She investigates, against her better judgement, and walks bang into anyone's worst nightmare.

The sequence of events, as they unfold, feel real. Because there is so much media coverage in our average day to day lives, we've become used to watching the war on tv, investigations as they unfold. This is no different.

In the midst of the chaos of the horror of the gunman's actions, the other players in the novel are roped in and you have to keep your wits about you. The book is multi-layered and a fantastic puzzle with twists and turns. The writing is never overly descriptive, the events do not get overplayed, rather people's reaction to these events.

Onto the two main characters: Julia's a survivor. She's tough but not brash, which makes her very likeable indeed. The author has worked very hard to gain your empathy for Julia and what she goes through as she recovers from her near murder. Her actions are deliberate, logical and her motivations make sense. She WANTS to find out what really happened - there is a need to know, but because she knows that things didn't go down as the police wrote down in their report, there are times that she doubts her own sanity. She fears for her life, certain that the events in the village would follow her.

The second main character, Craig Walker, the son of one of the victim's, turns to Julia for help, sensing that there is more beneath the surface than the media and the police lets on. He's a likeable chap, a trained journalist, and like Julia he is keen to figure out what exactly motivated these events and who / what instigated them. Julia and Craig form a good team and they dig, mercilessly, to find the right answers.

Skin and Bones is plotted with great care and the author unfolds the story like a pro. The main characters are well drawn and the cast characters vary from unlikeable to intensely dislikeable to surprisingly human. The writing is very sharp and the observations on how society reacts to awful acts in a close community is very close to the mark.

Find Tom Bale's website here, along with a link to the opening chapter here. Skin and Bones was published earlier this month by Preface Publishing.
Who wrote this? Liz at 4:06 pm