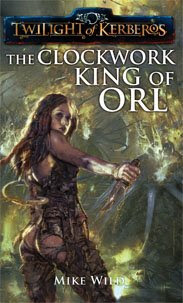 “The words of her mentor inspire Kali Hooper to explore the lost places of Twilight, unearth the secrets of its past and discover the fate of the vanished Old Races. So far, so good. But when an unexpected encounter in the deadly Spiral of Kos brings Kali head to head with Twilight's all-consuming Final Faith, she finds herself in a race for the keys to the 'Old Races' most terrifying secret yet ­ the mysterious construct known as the Clockwork King of Orl.”

The Clockwork King of Orl takes place across the breadth of Kerberos, a land littered with the discarded and forgotten remnants of the long-vanished and enigmatic dwarven and elven races.

It across these lands that Kali Hooper ranges, plying her trade as a proponent of ‘athletic archaeology’. Driven by an insatiable curiosity, Kali doggedly seeks out remote pockets of the old races civilisation, selling the trinkets and sharing the true discoveries with Moon, her mentor.

The story begins as Kali explores a particularly inhospitable forest, and stumbles across a seemingly untouched old world structure, the Spiral of Kos. However, she and her enigmatic steed ‘Horse’ are not the first ones there.. the ensuing encounter with the ruthless Munch -an oddly fluffy name in the context of his man’s homicidal leanings- sets the wheels of a certifiable Adventure in motion (and yes, it needs a capital).

Kali is an intelligent, tough, outspoken and likeable character; the leather-clad lovechild of Lara Croft and Rick O’Connell. She has an intriguing story of her own, part of which is revealed to her during the race for the Clockwork King, and something which I hope Mike Wild will explore in later novels. As a setting, Kerberos is certainly fertile enough to support a wide range of further adventures.

As it is, Clockwork is the second book in Abaddon’s ‘Twilight of Kerberos’ series and I’m quite tempted to go pick up a copy of the first book, Shadowmage, so I can match up some of the references.

But the fact that I could pick up Clockwork as a standalone read and enjoy it as much as I did speaks volumes; I’ll definitely be adding any of Kali’s subsequent adventures to my ‘get this, read this’ list!

I read Shadowmage but I wasn't really sure whether to read the next book in the series or not. After reading your review I think I have to chnage my mind.

Beside this there is an other Abaddon series which I like very much: PAX BRITANNIA
In case you like steampunk with some action and mystery.......