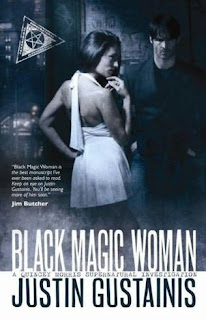 I have had a bumper weekend of reading and finished this off on Friday evening and now that our electricity is back on - thank the gods - I can upload the review.

Synopsis - Occult investigator Quincey Morris and his "consultant", white witch Libby Chastain, are hired to free a family from a deadly curse that appears to date back to the Salem witch trials. Fraught with danger, the trail finds them stalking the mysterious occult underworlds of Boston, San Francisco, New Orleans, and New York, searching out the root of the curse. After surviving a series of terrifying attempts on their lives, the two find themselves drawn inexorably towards Salem itself—the very heart of darkness.
The story opens with a bang, at breakneck speed. We meet Texan Quincey Morris (yes, grandson of one of the paramours to Lucy in Dracula, by Bram Stoker) as he goes about kicking some vampire butt, very reminiscent of the Wes Craven movie, Vampires...only better written without the swearing.
I like Quincey as a character as he brings across the Texan toughness with that long slow sense of humour that is so well portrayed in many westerns. Libby Chastain was a surprise. I thought the author was going to turn her into a parody of Wiccan cuteness a-la Charmed and thank the heavens he didn't. Here we had a genuinely well thought out, well rounded female lead who did not need rescuing with her bosoms heaving. It was refreshing and fun.
By far the most disturbing thing about Black Magic Woman is the fact that it deals with a very sore subject, that of Muti murders. Muti is an African word and means magic, black magic, and it is nasty stuff. It is very real and very horrifying belief system in Africa, especially South Africa so I was interested to see how it would be played out in the book. A spate of murders here in the UK had it all over the news not so very long ago and it was quite an eye opener to see it being used in the book as part of the plot. It is well researched and I found myself nodding along as a South African policeman, Van Dreenan who had been called in to help the FBI BAU, helped them sort through fact and fiction.
I enjoyed the book and the characters - each of the people we follow in the novel, towards the climax had a well thought out back story and the author did a lot of show, not tell, which is an amazing feat. I found myself checking impatiently at one stage to see if I had missed out on a previous novel featuring Libby and Quincey, but it turns out I hadn't. As the story unfolded, it gave up its secrets and I was pleasantly surprised and pleased.
I am not one to be swayed by quotes from other popular authors on the covers of books but Jim Butcher has a note on the cover of this and it merely states that it is one of the best manuscripts he's read in a long time. And the thing is, I have to agree. It is a compulsively readable and thrilling book that I will happily recommend to others because it hits all the right buttons - it deals with the supernatural, it has kick butt heroes, a really good plot, which is well told, interesting walk-on characters and a well thought out world. The trouble Quincey and Libby get into is pretty scary and things get ugly in here. The law is real and nasty things happen to nasty people, so in that instance it is a winner.
Having heaped on all this praise I am happy to say that I am looking forward to the author's other work. This is good, and the rest will only be better. The characters are solid and very real so he has several story lines which he can play with for future books. All we have to do now is impatiently wait for the next ones to be published!
Who wrote this? Liz at 6:10 pm

Really good review :) I've been eyeing this one up for a while, never requesting it; I think I may have to now! :D