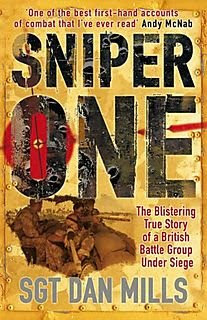 Sniper One is Dan Mills first person account of the siege of Al Amarah, one of the most protracted engagements the British Army’s been engaged in recent history.

It’s a fast paced, gripping and overall a surprisingly good read. There’s no philosophical navel gazing, it really does what it says on the box and puts you right there with Mills and his cohorts from the Princess of Wales’ Royal Regiment. You’re firmly in the passenger seat as they come under attack from all sides; Mills certainly doesn’t pull any punches and gives what is in my view the best personal account of combat I’ve read since Moore & Galloway’s We Were Soldiers Once, told honestly and without bravado.

Admittedly some of the slang used might be a bit obscure for non-UK readers but shouldn’t prove a major stumbling block, certainly not for fans of the genre.

If you see this lurking on a supermarket shelf, do yourself a favour and drop it in your trolley.
Who wrote this? Mark at 7:33 pm