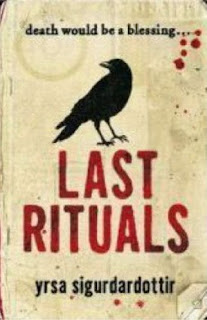 Synopsis: A young man is found brutally murdered, his eyes gouged out. A student of Icelandic history in Reykjavik, he came from a wealthy German family who do not share the police's belief that his drug dealer murdered him. Attorney Thora Gudmundsdottir is commissioned by his mother to find out the truth, with the help -- and hindrance -- of boorish ex-policeman Matthew Reich. Their investigations into his research take them deep into a grisly world of torture and witchcraft both past and present, as they draw ever closer to a killer gripped by a dangerous obsession...

This is Yrsa Sigurdardottir’s first book and if this one is anything to go by, she has a very lucrative career ahead of her as an author. Last Rituals does not read like a first book at all and the author is as eloquent in her writing as some of the best crime writers out there who win accolades for their work (even when you suspect they are a bit formulaic).

Thora, as the main character in the book is a delight. She is an attorney (lawyer) in a small concern and where she is cursed with the world’s most awful receptionist, Bella. Thora uses her investigative and stubbornness to plow through the mis-information thrown at her by the murdered student’s friends and tutors.

On the one hand Thora is a capable businesswoman with a lot of responsibilities but on the other hand, she is a struggling single mother of two, who somehow manages to juggle both career and being a mother struggling to retain her sense of humour and positive outlook whilst getting the job done.

The subject material of the novel is pretty grim. Witchcraft and the prosecution of witches and sorcerers in Europe is not a pleasant affair and the novel takes you pretty deep into some of the baser things done during those times. There are lashings of Icelandic history to boot and some stunning locales visited. It also holds up a mirror to show the disenchantment of today’s young people with being normal and revels in pushing the boundaries to show how far some people would go to prove that they are different and unique.

For all its dark subject matter, the book is written with a light-hearted touch with Thora being the focal point and we follow her quite closely. There are some moments of deep introspection but also some genuinely jocular and funny moments which prevents the novel from being too dark and grim. It is definitely a novel for people who enjoy books written by authors such as Kathy Reichs and Tess Gerritsen amongst others.

I really do hope the author decides to write more, to bring back Thora for more adventures. There is definitely scope for it on the market and with the unique setting of Reykjavik and Iceland being used, it opens a whole new world to readers who have become a bit jaded about crime novels set in America’s biggest cities.
Who wrote this? Liz at 12:45 pm