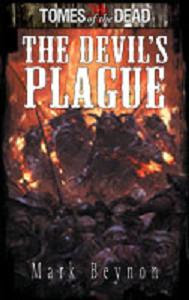 This is Mark’s debut novel and is part of Abaddon Books’ Tomes of the Dead series (although the books are generally standalones ).

I’m a fan of the zombie apocalypse genre and couldn’t resist tucking into this after reading the back-cover blurb, which is strangely hard to come by on Abaddon’s website.

It’s set during the English Civil War and centres around a diabolic pact made by Cromwell- in return fro his soul, he's been given control of a demonic army, the (wonderfully named) Kryfangan. But, unknown to Cromwell, aside from an unquenchable thirst for violence, the army brings with it the titular plague, which causes their victims to rise as zombies, who in turn seek vengeance on the demons, raising their own army the old fashioned zombie way.

The story follows a troupe of actors who fall in with Charles Stuart, rightful heir to the throne, falling foul of Cromwell and his legion in the process. They set off to escort Charles to Portsmouth, but their route is beset by Parliamentarian patrols, zombies and witch hunters, taking them through the bleak slaughterhouse formerly known as London.

It’s a well paced, entertaining read and Mark’s future work will undoubtedly benefit from the experience. While I only got to know the secondary characters in passing, and some of the dialogue could have been a bit punchier, these were minor issues and certainly didn’t detract from my enjoyment of a strong debut from Mark.
Who wrote this? Mark at 5:08 pm

Hey Mark,
Just wanted to say what a cracking review, Ive read the book in question and I have to agree with all your points, for me it was part of the dialog that made it so hard to get a firm grip on a number of characters but as youve already said it moved along at a reasonable place and did present an alternate history with a bit of a punch.