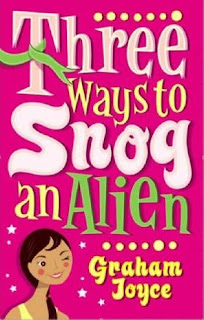 This is one of the funniest books I've read in a long time. I was laughing out loud on the train, which is always handy if you won't want to share carriage space with sane people, and literally tore through the book at high speed.
It's a slender offering, but don't let that put you off. I know Graham Joyce from his disturbing adult novels and had no idea he could be quite as uncomfortably and hilariously funny as this.
The book deals with Doogie who is a nice enough guy. His life isn't complicated, he acts the clown and is one of the guys in school all of us knows: he acts in such a silly and stupid way, making jokes, often at his own expense, and in the end, we all think he's a bit thick. Nice enough but not worth more than a laugh in class.
A new girl moves into the neighbourhood and completely thows Doogie's life out of whack. She challenges him, telling him that he needs to pull his socks up: if he keeps acting that stupid, he will stay that stupid, because everyone expects it. She drags him off on a date but Doogie decides to do research about dating and so he finds a website called Datingtips.com and then the fun starts. I don't want to spoil it but anyone who picks up the book and reads the tips will be cringing - they are incredibly funny but also quite shocking because you know there are guys out there who would fall for these tips themselves. Kudus to Graham for coming up with these - they are excellent.
But the biggest question here is: is the new girl an alien? Her parents are very weird, she is super-intelligent and honestly, Doogie saw her lick the last bit of ice-cream from her glass with a forked tongue! And that's not all, he meets a group of people on the internet who confirms his suspicions...aliens are among us and all the weird things about Angelica point towards the fact that she is one...
It kept me guessing. All the way to the very last page. And laughing. Don't forget the laughing.
I've got the well-received "Do the creepy thing" by Graham to read too, so will report back on that once I've got a few others under my belt.
Who wrote this? Liz at 9:06 pm