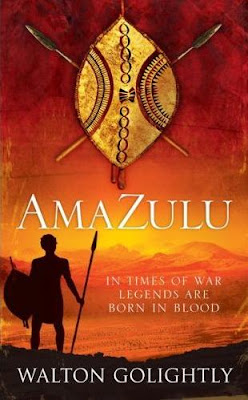 To this day, there is still debate whether Shaka KaSenzangakhona should be remembered as a military genius who united the Zulu people and forged one of the most powerful sub Saharan nations, or a military genius with an almost sociopathic thirst for revenge whose reign saw over a million people fall to the assegais of his impis.

Time and romantic notions of a 'noble savage' have blurred history into myth, but the fact is that the story of Shaka really doesn’t need any such embellishment to be captivating.

Walton seems to have realized this and has created a sweeping, historical work which tells the story of Shaka’s bloody rise to power from his days as an exile in the service of Dingiswayo to undisputed king of a transformed Zulu nation, told through the eyes of one of Shaka’s trusted lieutenants and his shield-bearer as they navigate through these turbulent and often violent times.

While Walton’s not shy with fruits of his formidable research, he’s successfully infused the story with the right amount of nuance to create a finely balanced and thoroughly enjoyable tale that successfully blends fact and fiction. As someone who enjoys military history and a range of fiction, I have to say it satisfied on both counts and I’d happily recommend it to anyone either remotely interested in South African history or looking for a gripping adventure.

It's the first in a trilogy which will track the Zulu empire from its birth in fire and blood right up to its legendary clash with the British empire- and I for one am in it for the duration.

I was amazed at the quality of Walton Golightly's writing. AmaZulu is an impressive work indeed. Well done Mr Golightly