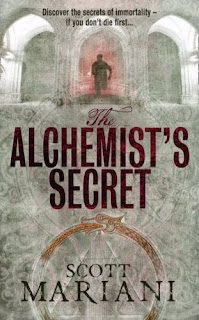 Synopses: A former élite member of the SAS, Ben Hope is tortured by a tragedy from his past and now devotes his life to finding kidnapped children. But when Ben is recruited to locate an ancient manuscript to save a dying child, he embarks on the deadliest quest of his life. The document is alleged to contain the formula for the elixir of life, discovered by the brilliant alchemist Fulcanelli decades before. But it becomes apparent that others also desire its secrets - for far more evil ends. When the script remains impenetrable, Ben teams up with beautiful American scientist Dr Roberta Ryder to crack the code. It seems that everyone - from the Nazis during WW2 and powerful Catholic organisation Gladius Domini - wants to unearth the mysteries of immortality. The trail leads Ben and Roberta from Paris to the ancient Cathar strongholds of the Languedoc, where an astonishing secret has lain hidden for centuries.

As you might know and have realised by know, I am a sucker for quest stories. I love them! In book form and in the movies! Yes, I am the original Indiana Jones fan – I dug up my parents’ carefully planned garden every weekend, looking for treasure I had accidentally “lost” – much to their anger. But I digress:

So, when Avon sent this onto me to review, I was in the throes of finishing a coursework assignment for CEM. So I got up extra early to read it and stayed up late to finish it. Alchemist is that good, I kid you not. I am so enarmoured of it, I’ve rung them up and asked for an interview with the author, Scott Mariani and because I can be a bit scary in full swing, they agreed just to get me to shut up. So keep an eye out for that in the next few days or so.

It is Scott’s first book and it is not noticeable in that it comes across as a polished piece of work that heralds a new light in this genre. The main character Benedict Hope is a fantastically dark hero who has issues and girls like dark broody men with issues! Having said that, nowhere does this make the story lag. The author has cleverly managed to work his dark character in as part of the storyline, so when the information comes as to why Ben can be a bit of a bastard sometimes, instead of feeling a bit annoyed because seriously, it’s not that big an issue in your opinion, you feel empathy and understanding towards him and like him for what he does even more.

An important part of the quest for an item is the adversary. And I relished the adversaries in Alchemist – a secret order of the Catholic Church – the Gladius Domini. They are Bad Men, with capital letters. And they are Ruthless, Dominating, Scary and pretty well thought out – you can sort of tell that they kept on going in the background, working towards their own goal, whilst keeping an eye on Hope and Dr. Ryder. In other words, they weren’t inanimate bad guys who only appeared out of the blue to annoy the main character and his leading lady.

The research done into alchemy rings true (she pronounces, in a nerdy way) and unlike in other books of this type, the info dump is done cleverly and at a good pace, so that you don’t just glaze over them, wishing they would get on with the story. There are interesting twists and turns, a few enigmatic characters along the way and a bit of a sting in the tail.

All in all, a satisfactory good read written with tremendous pace with good characterisation of the main character.

Scott Mariani has another book out, very soon, through Avon in July called The Mozart Conspiracy.

Hey Liz,
Does sound interesting but Im intrigued by the baddie. Gladius Domin if my latin is right doesnt it translate as something like Sword Demesne (Estate/territory/unrestricted possession of land?)

Sounds interesting so will have to check the book out.

Ah thanks liz. Wasnt sure if we were going Italian or Latin.

This one sounds very good, matey.

And this site, quite frankly, ROCKS!!

You'll have your own column VERY soon, I can feel it...