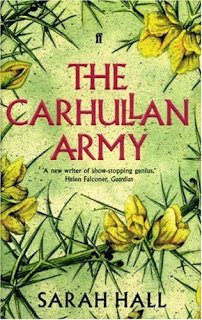 It was the rush of water into her own home that inspired Sarah Hall's third novel, The Carhullan Army, which won the Booktrust's John Llewellyn Rhys Prize in December 2007.
TCA describes the future dystopia which opens as a young woman, known only to the reader as "Sister", flees from a crowded apartment block in a squalid town under the totalitarian control of The Authority.
Resources are rationed. Food comes in tins from America. Fuel is scarce. Medicine stores are running out and in any case new strains of old diseases are resistant to the drugs.
Women are fitted with coils (nicknamed "dog leashes") to prevent pregnancy and there is a lottery in which the prize is coil removal for a few lucky ladies. Sister is heading for the hills, where a group of tough, renegade women are holding out as "unofficials" on an old farm where they grow their own fresh vegetables, striving to become self-sufficient whilst one elite unit prepares for battle against The Authority. (taken from the interview with Sarah Hall in the Telegraph).
The thing about The Carhullan Army is that it is one of the scariest books I have ever read. Not because it is filled with scenes of gore or horror, but because it felt uncomfortably like reading a book about something that is on the cusp of happening.
Like "How I Live Now" and "The Handmaid's Tale" it is set in a dystopian future which is, if you ponder it, uncomfortably possible. We follow Sister as she makes a run for it from an awful relationship and a life akin to slavery. She literally heads for the hills, to Carhullan, to make a better life for herself amongst a tribe of women who live a life of hard labour but contentment, battling the elements and eking out an existence on the land.
Sister's appearance on the farm triggers curiosity and very little animosity. She finds a home, becomes accepted and finds warmth and love with one of the women.
The leader of the women on the farm, Jackie Nixon, is one of the most charismatic and enigmatic characters I've come across in a book. She is a legend in her own lifetime, a woman with a strong spirit, who is as uncompromising as the land she cultivates. She uses Sister's appearance as a catalyst to create a shake-up in a community that's become lulled by into a false sense of security. It is not an immediate change, but it progresses slowly and in that time we watch Sister grow and find confidence, a place to belong.
This is an incredibly powerful book written with great skill and prowess by an author who has clearly given a lot of thought to how quickly society can fall apart and the awful consequences which can so quickly come about - all we have to do is look how bad things are currently in the economy and you can feel the catsoft feelings of dread pad up and down your back.
A very good and satisfying read. I will definitely seek out the author's other books.
Who wrote this? Liz at 8:37 pm