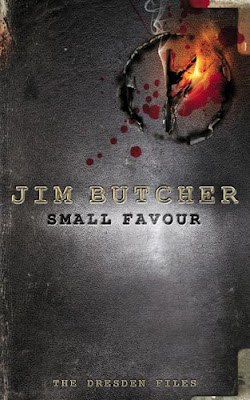 No one's tried to kill Harry Dresden for almost an entire year, and his life finally seems to be calming down. For once, the future looks fairly bright. But the past casts one hell of a long shadow.

An old bargain has placed Harry in debt to Mab, monarch of the Winter Court of the Sidhe, the Queen of Air and Darkness-and she's calling in her marker. It's a small favor he can't refuse...one that will trap Harry Dresden between a nightmarish foe and an equally deadly ally, and one that will strain his skills-and loyalties-to their very limits.

It figures. Everything was going too well to last...
---
More than his magic, Harry is defined by his ability to get himself into deep trouble without any effort and his stubborn loyalty to his friends and personal ‘code’, even if he wouldn’t necessarily describe it as that himself.

Harry and the usual cast of the Dresden Files are so well established that Jim has the luxury of catapulting us into the thick of things within the first dozen pages, and from then on, solidly hooked, you have no choice but to hold on tight for the rest of the ride.

And what a ride! White knuckles all the way as Harry goes up against a full contingent of fallen angels, while trying to keep his friends alive, friendships intact, and trying to escape the machinations of the Sidhe courts. I really enjoyed the tangible impression of how Harry has grown and matured since Storm Front (the first in the series); he’s not quite embittered by his experiences, but you do start getting a sense of the toll the war has taken on him personally; as a result, he's that much more believable. Not some super-hero above us all, just another Joe trying to do his best.

If you’re a Dresden fan (who isn't?), you probably won’t need much in the way of encouragement to get your hands on this. If you’re not, well, you’d be better served starting from Storm Front and working your way up to the current instalment; newcomers to the series won’t get many of the references or the depth of the characters shared history. It would certainly be worth the investment.

But then, I wouldn’t expect people to jump into a series at the tenth book in the first place.


I found myself reading this book anywhere I could, like an alcoholic trying to sneak a drink in rehab.

Nice review! :) I read the first Harry Dresden book -- loved it, but somehow never got around to requesting the rest.

I will make a point of it, so thanks for the reminder!

I often jump into series' 10 books along ... but then I flounder like an idiot understanding less than half of the book and then I feel compelled to catch all the way up again! Costs me a fortune! :(

Jim's books are very cool. You can jump in at any point, but because they are so addictive, you know you just HAVE TO buy all of them.

Love the review, too. Very well put, and not at all as gushy as mine would have been - which is just as well! As I'm supposed to be studying Legal Studies! Tee-Hee.