Here is my interview with Scott Mariani I've promised! The Alchemist's Secret is out at the moment at all good book stores, with The Mozart Conspiracy being published on the 14th of July. Over here, at Avon, you can read an extract and find more information about Scott and his books and the other books Avon currently carry.

1. Congratulations, firstly, on your publishing deal with Avon. What is the very first thing you did when you found out that you were to be a published fiction author?

Thanks! It wasn’t quite the first time for me, as the book had previously been out in hardback with a different publisher and a slightly different title. But to be elevated to mass market paperback status by a publisher like HarperCollins is definitely a big step up and one of ‘those’ great moments for an author. I seem to recall there was a lot of champagne-drinking going on for a while…

2. Has it changed your life a lot?

Not so much in terms of lifestyle as I’ve worked from home for a long time already, as a literary consultant among other things. In career terms, though, it’s a radical change. Because the deal was for four books, for the first time I was able to immerse myself totally in that magical story world for an extended period of time. It’s a world I love to dwell in, though if you don’t come up for a gulp of reality sometimes you might get a little crazy! 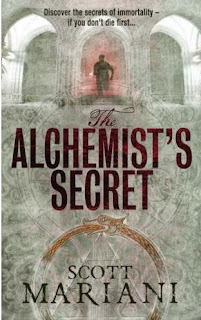 3. The main character in The Alchemist’s Secret, Benedict Hope, is a tremendously tortured character. But his grief is very real and as a reader I became to empathise with him. How hard was he to create?

In real life a lot of people can be tortured long-term by a burden of guilt stemming from some mistake or accident that might not always be their fault. I think that’s something we can all identify with to some extent. It was interesting to create a hero whose life path had been dictated by this incident in his past, steering him in a whole new direction. As a result of it, it’s Ben’s destiny to have to help others, even though happiness is not something he can find easily for himself… As a character, he gradually came together in my mind over a period of time out of various different ideas. Then he just seemed to click into place. Looking back, I wouldn’t say he was very hard to create. He comes naturally to me, in his actions, his way of thinking and speaking.

I’m pleased to say that Gladius Domini – Sword of God – is entirely fictitious, which is probably good news for the world. However I did do quite a bit of research into the rise of fundamentalist Christian cults, which is a very real phenomenon.

5. Do you read widely in the thriller / adventure genre you write in?

Fairly widely – I like to keep abreast of things and have certain favourite authors I keep up with. But my main passion is film, and so I see a lot more thrillers than read them. Many readers comment that my writing is very visual, just like watching a movie, and I guess that’s probably due to the fact that my process is more akin to directing a film inside my head than writing a book!

6. Your research into the alchemy, which formed such an integral part of the plot, is of a very high standard. Was this something you enjoyed doing?

Very much. It’s a gigantic subject, and in fact I ended up having sacrifice a lot of really fascinating material to avoid bogging the story down with facts. I fully resonate with my character Roberta Ryder’s interpretation of alchemy. At its best, it’s a much more profound and important science than history has really given it credit for.

7. It was refreshing to find an initially grumpy female side-kick in Dr. Ryder. When we first meet her she is a bit defensive (understandably so) but she comes about in her own way and time. How did you plan the escalation in their relationship?

Firstly, I wanted to create a heroine who wasn’t about to swoon at the hero’s feet! To me, the really compelling heroines in fiction are the strong, edgy ones – Sarah Connor in Terminator 2 is a favourite. Their relationship more or less develops naturally from their respective viewpoints as danger draws them together: she’s initially a bit wary of this guy who’s clearly not a journalist as he claimed, has certain lethal skills and isn’t afraid to use them. And Ben initially regards her as dead weight, an impediment to his quest. So yes, it starts out as a slightly frosty relationship in some ways. I wanted to draw that out for a while, letting the reader see the chemistry between them while the characters themselves are blind to it. Then later on, of course, they open up and come to realise how much they really care for one another.

8. Do you write to music and if so, do you think it influenced what you wrote?

Yes, I do. Depending on what you’re writing, and the kind of tone and atmosphere you’re trying to create, different kinds of music can really help. For The Alchemist’s Secret I listened to a lot of sacred choral music. The modern composer Arvo Pärt brings a slightly dark, dissonant edge to it – that’s what I was listening to for some of the more spooky, gothic-tinged scenes, such as the opening in the graveyard with the priest and the madman. Then if you’re doing car chases and gunfights, it helps to get your pulse thumping with something a bit more rocky.

9. Did you get to travel for your research at all?

I was fortunate enough to be pretty familiar with the locations for The Alchemist’s Secret, having spent a lot of time in France. There are a couple of locations in the next two Ben Hope books that I visited during the writing process, just to be able to bring an authentic flavour to the page. I think it’s important to take the reader there, make it feel real to them.

10. What is the most important thing you have taken away from completing your first novel?

Aside from the obvious sense of achievement, for me the most important and pleasing reward is knowing that this character I’ve created, who I always believed had ‘legs’ as a returnable thriller hero, will definitely be coming back at least three more times. That really allows me to extend his scope as a character, and I think the readers will find themselves more and more involved in his life and adventures as he goes on.

11. What can we look forward to for Ben in Mozart and Doomsday?

The next two books will really deepen the reader’s sense of this rather complex guy Ben Hope, while the plots get thicker and the action gets faster. In The Mozart Conspiracy we delve back into his past to see another side to him, and it’s through meeting up with his old love (opera singer Leigh Llewellyn) that he’s plunged into another intrigue, this time surrounding the death of Mozart in 1791. It’s a very intense chase thriller. Ben will be up against some seriously nasty villains, including my favourite, Jack Glass. The Doomsday Prophecy isn’t out for a while yet, but I can tell you that the action is ramped up another step again.

12. Would you consider writing in any other genres, maybe do a teen/young adult novel in the same vein?

It’s funny you should mention that… the idea of a kind of ‘son of Ben Hope’, aimed at a slightly younger readership, has been floating around for a while. Who knows, we’ll see. But I have lots of other ideas too. I noticed you’re a big fan of Kelley Armstrong. Me too, and I have a vampire / supernatural story on the back-burner. Though if the demand keeps up, maybe I’ll just keep writing Ben Hope stories until I eventually drop dead at the keyboard!

13. Do you have any literary heroes?

There are definitely authors I admire a great deal, but if I had to name heroes they would be more from the world of film, masters of the craft like Hitchcock, James Cameron, Peter Weir. I am a huge fan of what Paul Greengrass did with the Bourne franchise, and I also love – and am probably quite influenced by – the early work of Italian horror maestro Dario Argento, things like Deep Red. And lots more… they’re too numerous to list!

14. You wrote a how-to book called “How to write a Thriller” and it looks pretty interesting. Did you find the task daunting at all?

Actually, it was a lot of fun to write. I was really glad to have the opportunity to do it, drawing on my experiences as an author and literary consultant. I’ve had a lot of very gratifying feedback on the book – I got a letter from one reader who used it to revise their whole manuscript and got himself a publishing deal as a result. It’s tough out there, and I’m delighted if the book has been able to help a few prospective authors on their way.

15. Do you have any advice for aspiring writers out there?

Have your story in your head before you begin to write, or you’ll torture yourself staring at blank pages. Don’t give up. Don’t be put off, or embittered, by rejection. Believe in what you’re doing. And in the midst of all the blood, sweat and tears, don’t allow yourself to forget that you love this!
I will shortly be running a competition to win copies of Scott's book, The Alchemist's Secret so make sure to check back and oh yes, swot up on your Alchemical sigils!
Who wrote this? Liz at 7:58 am

Fascinating! Much as I want to read this, I'm looking forward to the Mozart one even more.