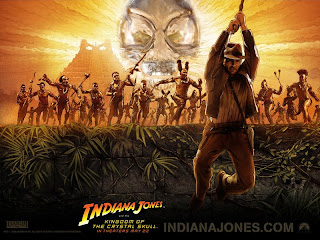 Gareth from Falcata Times has eventually given in to stop me nagging incessantly around his ears to do a guest blog for me - so, voila! he's reviewed a selection of the newest Indy Jones books that's come to the market. 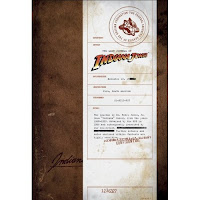 The Lost Journal of Indiana Jones
Basically a great item for the fans of all the Indy films, there’s sketches, notes, photo’s and looks like Indy did write the whole thing. Within the journals pages there was information from his childhood right through to his latest exploits. Pretty groovy to be honest.

However, personally my major gripe is with the presentation.
Whilst it does look and feel like a “genuine” article I did feel a little disappointed with a number of things. Firstly one thing that the publisher took the time to give the journal a leather feel with stitching across the top and sides and even added the red binding band that you see in Raiders of the Lost Ark, however what they didn’t do, which I’d have loved would have been to have pull outs as if things had been “stuffed” inside or even had it feel like it had been glued (in much the way that they did with their Spiderwick book) and in order to cover the 4 films as if it were a true secret journal I’d have left out the childhood bits and just concentrated on the stuff that the “Government” wouldn’t want made public. But that’s just me.

On the whole a great item for the fans but it could have been so much more if a little more thought had gone into it. 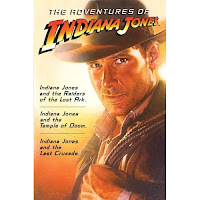 The Adventures of Indiana Jones
If you’re a fan of the Indy films then this is the huge action packed book of the previous three films in written form. As you’d expect all are well written, great accompaniments however the major problem is that when you’ve seen the films it really does make this book redundant. An item yet again for the fans but its real value for money as how many other books for £8 do you get three seriously fun tales? That’s serious savings and will more than entertain for a few days and was a pleasure to read prior to heading to the pictures for the viewing of the fourth and probably final Harrison Ford Indiana Jones outing.

Indiana Jones Omnibus – Volume 1 Graphic Novel
You’ve seen all the films, read all the books and still need an archaeological fix that Tony Robinson just isn’t going to cut. What do you do? Quite simply head out and get this omnibus of graphic novel short stories featuring everyones favourite whip-cracking, ladies loving Professor. Contained within are tales by William Messner-Loebs ('Wonder Woman') and Dan Barry ('Flash Gordon') who also provides the art. Fun and mayhem are never far behind as the proverbial frying pan is never far from the fire and you do wonder how our hero has managed to live so long. The gods as well as the fans must love him and the presentation of this, truly was a delight to behold. An item that is a must keep. 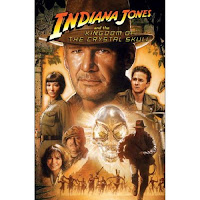 Indiana Jones and the Kingdom of the Crystal Skull Graphic Novel Movie Adaptation
OK, I’m going to come clean here, this arrived a week before the film was released and I couldn’t wait to get my hands on it, however it did ruin the film for me as I knew what was going to happen near enough down to the letter. As a bright side though certain facts omitted from the film did make it into this GN for example the fact that Mutt was expelled from school for betting on the outcome of his fencing matches.

A great item however I do feel that whilst the artwork was of a certain quality, in today’s technological world they really could have done a bit more to make the characters look exactly like the ones from the films rather than the artists own interpretation in places and to be honest I think it could have been better if the original script writers had spent more time working on the sparkling repartee of the characters over the action sequences that made the other films such compulsive viewing.
Who wrote this? Liz at 8:20 pm