It's rare for me to not finish books.  But two of them really got under my skin for various reasons, so I thought I'd quickly blog about them and ask if anyone's read them and what your thoughts were on them.

The first DNF for me was: 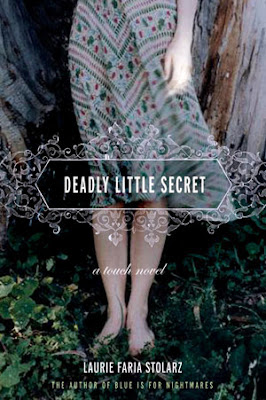 
Until three months ago, everything about sixteen-year-old Camelia's life had been fairly ordinary: decent grades; an okay relationship with her parents; and a pretty cool part-time job at an art studio downtown. But when Ben, the mysterious new guy, starts junior year at her high school, Camelia's life becomes far from ordinary.Rumored to be somehow responsible for his ex-girlfriend's accidental death, Ben is immediately ostracized by everyone on campus. Except for Camelia. She's reluctant to believe he's trouble, even when her friends try to convince her otherwise. Instead she's inexplicably drawn to Ben...and to his touch. But soon, Camelia is receiving eerie phone calls and strange packages with threatening notes. Ben insists she is in danger, and that he can help – but can he be trusted? She knows he's hiding something...but he's not the only one with a secret.

I've just checked and Twilight was published back in 2007 and this was published in 2009.  I thought that maybe, it was an accident that things were similar, and I still hope it is...but basically, the whole opening sequence and a lot of the novel is very similar to Twilight.  Mysterious boy saves girl from certain death by pushing her out of the way, the boy touches her and they both get tingles.  In class she's made to work with him on something but things go awry and she's sure he hates her and she pines for him.  But there's more - her friends, the secondary cast is peculiar in that they don't take Camelia's concerns seriously when it comes to her being stalked by someone and threatened, in a very obvious way.  They seem clueless and focussed only on their own little dramas and don't seem to realise how frightening the situation is their friend finds herself in.  Instead, there's more focus on who the hot boy is, the rumours about him, and how her bff is keen to get into anyone's pants to the extent I wished ill on her head.

The fact that Camelia doesn't bother telling an adult about the fact that she's being stalked and threatened really angered me.  It sends such bad messages and it makes you wonder why you wouldn't tell anyone you're being sent threatening notes or when you know someone's been in your room.  Especially as a teen, this is so awful and so frightening.  And yet, somehow, Camelia manages to completely sweep this under the rug and focus wholly on the hot boy whose touch she craves.  I felt a bit ill about it.  They seemed so clueless and unable to grasp the situation, I gave up reading it.  I felt as if I was reading a dumbed down book and although I'm pretty good as suspending my disbelief, I just couldn't believe that a character who came across as relatively levelheaded can make a series of really ill-informed decisions and come across as a victim.  I don't know if she redeems herself, and sadly, I'm not sure I care.  This book gave me really mixed feelings and the message and story was blurry.  Has anyone read this and is it worth completing? Please, do tell me.

My second title I've not finished was Thirteen Orphans by Jane Lindskold.  I thoroughly enjoyed my previous outing with Ms. Lindskold and thought the Thirteen Orphans sounded rather splendid.  Here's the write-up. 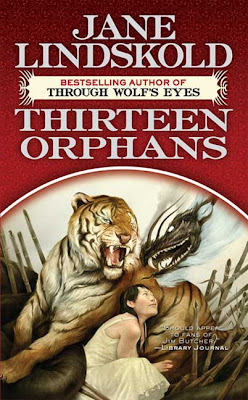 As far as college freshman Brenda Morris knows, there is only one Earth and magic exists only in fairy tales.

A father-daughter weekend turns into a nightmare when Brenda’s father is magically attacked before her eyes. Brenda soon learns that her ancestors once lived in world of smoke and shadows, of magic and secrets.

When that world’s Emperor was overthrown, the Thirteen Orphans fled to our earth and hid their magic system in the game of mah-jong. Each Orphan represents an animal from the Chinese Zodiac. Brenda’s father is the Rat. And her polished, former child-star aunt, Pearl—that eminent lady is the Tiger.

Only a handful of Orphans remain to stand against their enemies. The Tiger, the Rooster, the Dog, the Rabbit . . . and Brenda Morris. Not quite the Rat, but not quite human either.

I loved that it delved deeply in Chinese mythology and that it started off with Brenda and her dad.  I thought it was brilliant and unusual...and then things started bugging me.  Brenda's voice was super young and naive for someone who is in college.  Well, I say that, but she also displays a tremendous amount of knowledge about the game mah-jong, even if they've only ever played it occasionally.  I've played monopoly a few times but I really don't know it very well or well enough to name you every square or car-thinghies. I also tend not to be able to recognise characters from Chinese food menu's, whereas she has no trouble doing so when she speaks to her dad and they talk about Chinese writing.  As someone from South Carolina, surely Brenda would have had interaction with people of colour? Especially in college? In Thirteen Orphans she mentions how little contact she's had with black people, especially black men.  So she had this image in her head about meeting this one chap they're searching for "the Dog" from the Orphans' and his name is RipRap.  And that when she sees him she's surprised that he looks decently dressed and his voice doesn't sound like a black man's voice. This just made me go what the actual crap?  Later on she has to tell her mum she's got an internship with her Auntie Pearl (also a mixed-heritage lady who looks more white than Chinese) and she doesn't tell her about the fact that RipRap will be part of the entourage because not only is he an unmarried single man...he is also black.  Dun dun dunnnnn!
That was enough for me.  I can understand the author trying to make a show of  the inter-racial-ness of the the cast of characters but by harping on about it ALL THE TIME made me lose my will to read and to make Brenda be the mouthpiece and so clueless...and not genuinely naive enough not to come across as racist and bigoted..bah. Not for me, at all.  Uch.  This book frustrated me so much - it held so much promise but I just really couldn't cope with it further and put it down in favour of something else.  We need more diverse characters in books - that is 2000% true, but this is not the right way to do it.  I spoke to another blogger about it via email and scanned two sections to her to see if I was being silly about things and said blogger confirmed that I had not lost my mind and that yes, it was as dubious as I felt it to be. And these two sections were only one of many.  To show you what I mean, here you go. 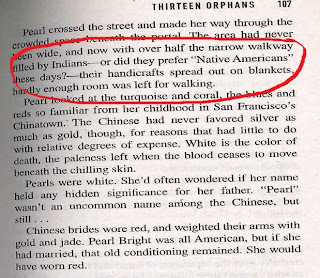 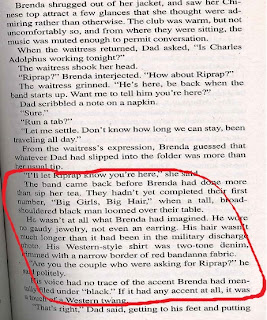 Loads of people seem to have enjoyed the book if you check out goodreads, but sadly, in this instance it just wasn't for me. I'd love to hear from people who've read these books, the series, basically to see how it goes as, even though I'm sore I didn't like it, I'm still tempted to continue reading, to find out what the story is behind all of the shenanigans at the start of the book and if it improves.

Good for you to put up your DNFs and why. I despair of every book review being brilliant because the reviewer doesn't want to be unkind.