Avatar - My Thoughts (by Liz) 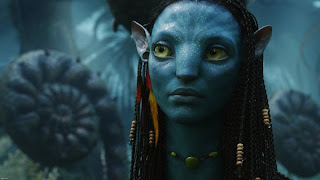 I admit to falling under the "oh my gosh, this is the worst movie in the world, it's racist, derivative, mostly cgi based therefore not really any good, a remake of Ferngully blah blah" spell when it first came out. I watched the trailer, rolled my eyes and was like: oh my gosh, Kombat Smurfs, how lame. Or even, Dances with Smurfs, as someone else called it.

So I turned a blind eye to good reviews and the general dialogue about the movie, thinking that we'll hire it from Blockbusters once it's released and I'll no doubt fall asleep watching it and that would be that.

But I didn't reckon with Mark who had been chomping at the bit to go and see it. So I capitulated with a heavy heart and moving heaven and earth to get there on time, we went to go and see it at Greenwich Odeon in 3D.

I have a problem with 3D. It makes me feel sick, dizzy, as if I have a dent in my face. Yes, I know. I'm weird. But, much to my surprise we got actual specs, not the flimsy paper things that don't really work, to view the movie in. So this already made me feel better about things. (Moving ahead I'm happy to report no ill-effects of the 3D glasses - no headaches, nausea or dizzy spells, so if that's put you off, do try it!)

My initial thoughts were that the movie is a homage to so many 'Nam war flicks we've seen in the past. The jungle, the hostile territory, the antagonistic natives. The wholesale destruction of an area by the invading force. How the invading force always sees themselves as doing the right thing, clamping down on the natives' barbarian behaviour, wanting to give them new lives, socialise them and bring them up to "our" westernised standards.

It was the whole colonisation thing between Britain, Spain, France and other other European countries all over again, spreading over the new world, but set in the future. And like in the past, it's sole aim is selfish: trade and commerce. Not necessarily trade with the natives, but stripping the land of its natural resources and then selling it for a vast amount of money to corporations on Earth and elsewhere. Sound familiar?

In this respect, Avatar shines a bright light on both our past and future. Where do we draw the line between respecting indigenous tribes and their habitat, doing research without being invasive and utilising natural resources without actually destroying the world / a world.

So, enough navel-gazing in that respect. It is what it is in the movie: a way to introduce conflict within its characters and within the audience. Being shown a beautiful place being destroyed by seemingly heartless corporations is due to get some kind of emotional response!

Onto fluffier things: I fell in love with the pure spectacle of the world of Pandora. The fauna and flora is astonishingly beautiful, well thought out and just amazing to see and experience on the big screen. You feel a deep sense of awe and it's mostly attributed to the apparent scale of the world and how exotic it seems. I was waiting for David Attenborough's voice over to start telling us about the Hallelujah Mountains, or the Toruk / Great Leonopteryx /Direhorses and whatever else. It looked like a nature documentary most of the time.

I felt that James Cameron was showing us something truly exceptional and I believe that his team he had working with him couldn't have done a better job to bring his mind-images to the big screen. The Na'vi are beautifully rendered - yes, they appear as slightly simplistic natives, elves, if you wish, in the traditional sense with little technology but living close to the earth and believing like most indigenous people do that everything is part of everything, and if one thing is out of balance, it means an unhealthy broken world.

The story of our hero's growth as a character and his realisation that he's not being one of the good guys, is one we've seen many times, before. It's a simple tale. It's part of the Christopher Booker "Seven Plots" thing: overcoming the monster (yourself) and your standard quest of boy is sent off on a hazy adventure, inadvertantly falls in with the "enemy" has a change of heart, and goes "native". Yep, it's all there but you know, it doesn't really matter at the end of the day because all movies (and stories) follow a formula, this one more blatantly than others, but dammit, it looks pretty. If you wonder what other movies are like this think of Dances with Wolves, Four Feathers and a heap of others.
I conclude to say that I really and honestly enjoyed Avatar - I don't know if that makes me weird or whatever, but I felt that my money was well spent and instead of hiring the movie, I'll probably pre-order it for future watching. Regardless of it's faults, of playing on sympathies and perhaps simplifying a race of people, the gist of the story is that everything comes at a price and that if you're brave enough, and stand up for yourself, you can perhaps change things. And by doing that, you experience change within yourself. Oh look, yet another of the basic seven plots!
Who wrote this? Liz at 9:22 am

Ya know, I think what bothered me about the movie was that the two sides were so blantantly good and so blantantly evil. I couldn't buy that. When I wasn't distracted by the 'oooh! pretty!' I was thinking about how this would never ever happen. Can you imagine the uproar if the US or the UK or whoever went and destroyed a beautiful place where there were intelligent, indigenous people? It would absolutely not happen UNLESS there was this huge coverup by the evil corporation. But if there was a successful coverup by an evil corporation, the people running that evil corporation would have to be intelligent, and the people in Avatar were... not. Honestly, I think Evil General Dude was what ruined* the movie for me. Every time he came on screen, I rolled my eyes. I could predict just about every thing he said.

So, I think the movie just fell flat (for me) because the bad guy wasn't developed enough. If there had been more of a gray line between good and bad - like if Earth was on the verge of destruction and had to get this mineral from this source in order to survive - I would have been more emotionally involved.

* I really shouldn't use the term 'ruined'. I enjoyed the movie, but it is definitely NOT something I'd want to watch again. I'm not a very visual person, so I need a good, engaging, unpredictable plot to keep my interest.

Hi Sandy - I actually wiped the bad-ass general from my mind, he was that crappy. Again, bear in mind, he was a tool to progress the story - a visual person to hate / dislike, i.e. blame it all on. Very one-dimensional. All the bad guys were, but then so were the good guys. I can nitpick endlessly as there are a lot of little things that I didn't like about it, but what I saw, I liked the majority of.

I think, to be honest, more than anything, I loved the world creation and I want to know more about IT. Is that odd? Liking a world more than the characters?