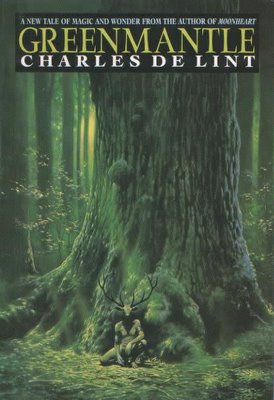 Charles de Lint is one of my favourite authors. He is a musician, writer and artist. I have probably got every single one of his books - not that I am obsessive or anything!

I picked up Greenmantle this week to re-read as I don't have anything new to read, having spent my allowance on presents for friends (send free books, in other words!).

I can only one day dream of being able to write as well as he does. He writes what can be termed "urban fantasy" - every day "normal" people happen across magical beings and suddenly, their world and their perceptions are turned upside down.

Greenmantle is no different.

It tells the story of a retired Mafia soldier - Valenti - who leaves the business behind and buys himself a love house in the woods. His neighbour turns out to be a young single mother called Frankie who has a fourteen year old daughter by the name of Ali. Frankie also has a nasty ex-husband who is after the few thousand dollars she had won on the lottery and he gets thrown into the mix of characters...it is about crime, mafia, music, magic, and believing in the impossible.

Meanwhile things are stirring in the forest - beautifully haunting music is played on a pipe, deep within the forest. Ali and Valenti go in search of it and find something no one expected - an entire village of English people who have returned to the old ways of nature worship. The young boy who is the piper calls the "mystery" to him - a large beautiful stag, that represents both the Green Man, Pan and Cerunnos, all at once. The music awakes within those who hear it, whatever they bring to it - be it anger, loss, pain, lust. It is powerful stuff and the first time I read it I was completely taken aback by the things written and said in there - the fact that Christianity is a fledgling religion, that it stole and borrowed from other religions to become what it is today...that our imagination is indeed strong enough to create beings of mystical power and to enable them to roam the world.

It is an eclectic book - beautifully written with so many questions being asked by all the characters that it is, in retrospect, not sumat you want to pick up and flick through and skip paragraphs and pages "cos they don't talk too much in this, do they?".

It is a fantastic read and for those of us with a bit of a New Age slant, it goes down very well. Heavy decisions are made by the characters in the book and they are all genuinely interesting people with faults and failings which makes you feel for them when they succeed or just crumble when you realised they did the wrong thing.

Good fun - give it a whirl.

Hmmm. Can't say I liked those ones; but loved Magic Kingdom of Landover. They reminded me of Neverending Story.

I read this book about 12 years ago and don't remember much except the cover. However, your review has inspired me to read it again so I will have to track down a copy!