Be carefull what you wish for - Alexandra Potter 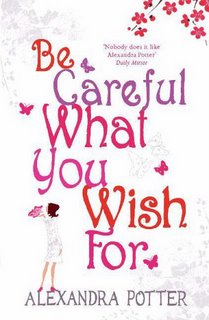 A guilty secret. I hate chick-lit. I hate these little pink fluffy books on the bookshelves being hailed as best-sellers. It makes me want to shout and scream as there are other "real" authors out there who deserve to attention these books get.

And then, after some retrospect, I realised how unfair I am being. Chick-lit caters to a certain group of women in market. And why shouldn't their needs be fulfilled?

Many people out there who read "serious" novels in the "acceptable" format of literary books, crime novels and thrillers, look at other writings in different genres and call them "fluffy" "not serious books". Science fiction and fantasy authors have been fighting for years against the stigma of their work not being called "real". I sometimes wonder if it is a case of sheer jealousy? Those who can't...turn into bitter jealous types who refuse to acknowledge hard work.

I picked Be careful what you wish for up fromWH Smith as an offer when I bought Fred Vargas' Seeking whom he may desire. I wanted to see, for the first time in absolute years what was going on in the chick-lit genre. I girded myself and reached out to the bookshelf with a quavering hand and picked it up, hastily paying for it and hiding it in my handbag.

And, I am glad I did buy it, in the end. It is a rollicking good read. You immediately like the main character Heather and can identify with her mishaps, her job, her own insecurities and how utterly hilarious some of the situations are she gets herself into. This is far better than I expected and I applaud the author wholeheartedly for giving a real character who interacts genuinely with her family, friends and two men her life.

This is the synopsis from Amazon:

A sassy romantic comedy to delight fans of Sophie Kinsella, Freya North and Helen Fielding. You couldn't wish for a better book! 'I wish I could get a seat on the tube...I hadn't eaten that entire bag of Maltesers...I could meet a man whose hobbies include washing up and monogamy...' Heather Hamilton is always wishing for things. Not just big stuff - like world peace or for a date with Brad Pitt - but little, everyday wishes, made without thinking. With her luck, she knows they'll never come true...Until one day she buys some heather from a gypsy. Suddenly the bad hair days stop; a handsome American answers her ad for a housemate; and she starts seeing James - The Perfect Man who sends her flowers, excels in the bedroom, and isn't afraid to say 'I love you'...But are these wishes-come-true a blessing or a curse? And is there such a thing as too much foreplay?

I would, out of five bookish stars, give it...four book stars.

It also taught me not to pigeonhole books. Now, all I have to do is overcome my aversion to science fiction books!
Who wrote this? Liz at 1:46 pm