Long Way Round - The book, not the TV show 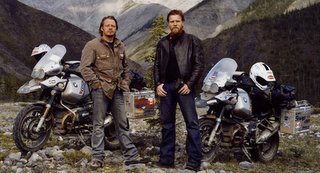 I didn't watch The Long Way Round when it aired on TV last year - I thought "yeah, yeah, another publicity stunt by two actors wanting to make yet more money".

But, in the end, at a loose end as what to buy hubby as a stocking filler, I opted for the book written by Ewan and his mate Charley. I didn't think it would be anything special but since it had to do with motorbikes, leatherclad boys and travelling the world, it would the stocking and be an interesting thing to chat about.

Both hubby and I are ex-bikers (I was the pillion as my own bike escapades ended with me selling my bike - Black Betty (eventhough she was purple) to friends of ours as her souped up engine was too much for poor me to handle) and I thought it would be a nostalgic way to look back on our crazy days of camping out with other insane bikers in the freezing cold or the boiling hot.

Hubby finished the book, loving it, laughing out loud sometimes and out of curiosity I picked it up and was instantly immersed in the two boys' adventure. I admit to being very wrong about it all. They weren't just out to make another quick buck. They were scraping money together to do what they have dreamed of doing for years - travel around the world. It struck a chord. I felt sorry for them as they ran around trying to do get funding for this trip, eventually agreeing to do a tv show just so that they could make the trip.

I sit back, having finished reading it last week Monday night and can't help but feel that this is something I would love to do myself. I told Mark and he looked at me as if I had just sprouted another head. Yes, right, he said, burying his head in playing Splinter Cell on the Playstation, clearly thinking that I had a fever.

Isn't that what books are supposed to do though? Make you want to run out and do things?

I followed the lads on their journey, loving their tongue in cheek way of writing, meeting hundreds of people through them, seeing that there are very few strangers out there, just potential friends. I felt sorry for Ewan though as he was being recognised wherever he went, even in Russia. The Kazaks told him blatantly that Moulin Rouge was not their favourite movie, not his best either. It was very funny. I think it took him aback as it just showed how far into the world one has to go to be anymous.

Charley was very funny - he was the angry one a lot of times, shouting at the back-up chaps and generally having fits about things. Which surprised me a bit as I thought Ewan would be the one throwing the prima-donna fits. Although he did, according to Charley, going into sulks and then being fine the next minute. Which amazed me even more - aren't us women supposed to be the ones with hormonal problems?

They had a rollicking time - eventually clocking that this journey which had started out so well, had turned into a schedule keeping malarky and once they relaxed, things went tonnes better. They travelled and saw things very few Westerners get to see, ever. I take my hat off to their cameraman Claudio who travelled with them and filmed them and their escapades. He was indeed the unsung hero of the book.

I think I will buy the dvd for Mark - of course - as it would be interesting to equate what was written in the book to what we saw on that.

Charley is currently doing the Paris to Dakar rally - but had apparently managed to break both his hands and is now merely travelling along as back-up to the other two chaps in the team. I am not sure what Ewan is up to but either way, I will always be a fan of them now and will always dream - even more - of going to farflung places and meeting interesting people. And have an Adventure. 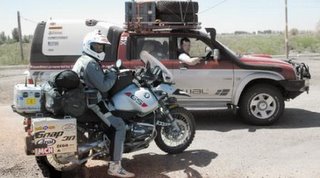