And now for something completely different...! 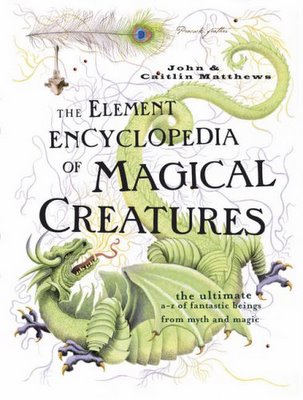 I am a sucker for anything to do with myths and legends, magical and mystical creatures. The above book was sent to me as the Editor's choice from my book club. I was thrilled.

This weekend I will be dipping into said treasure trove of creatures - who knows if inspiration might strike! For instance, from one of my other books in the same vein, I learned that Hagrid actually means giant in one of the Germanic/Scandanavian languages...very cunning Mrs. Rowling!

This is from the creature book itself - only one of thousands of entries:

Achelous
In Greek mythology, Achelous was a river
god who took three different shapes when
he chose. He could take the form of a bull, a
speckled serpent or a bull-headed man, like
the Minotaur. He wrestled with Hercules
for the hand of Dejanira and, while in the
latter form, lost a horn. The blood that fell
to the ground from the horn became the
Sirens, while the horn itself was discovered
by Naiads who took and filled it with flowers
and fruit. Classical myth tells us that
Achelous’ horn was then presented to
Plenty (Amalthea) who made it her cornucopia
(the ‘horn of plenty’).

How can you not be excited about having such an invaluable tool at hand? Yay for Thorsons Element for publishing a unique book!