Blogtour: Everything I know about ploting, I learned from Aristotle by M.G. Harris 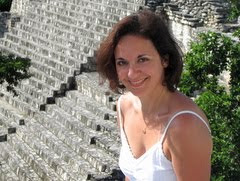 I first met MG Harris through her debut novel Invisible City which I fell in love with...because of it's cool cover. Yes, I am that fickle. Then of course, I read the rollicking adventure story contained between those covers of the first Joshua Files book and that was it. I became a fan, especially when I got to meet MG in person at the Guilermo Del Toro signing. *double the fan-girling*

The newest book (book 3) in the Joshua Files is out - Zero Moment - and I've purposefully not read it yet. *smug face* I'm holding it over as a treat to myself, as a reward - I'm looking at reading it in the next couple weeks as I'm hoping to have finished revising my own work in progress. Zero Moment would then be my treat for a job done. Because of this, I've asked MG to do something for me for MFB for those writers out there who need a bit of something.

And she's sent this excellent blog on to me and so, without further waffling:

Everything I know about ploting, I learned from Aristotle by M.G. Harris (#8 on the ZERO MOMENT blog tour)


There’s a short book that all writers should read and re-read, thousands of years old, by the ancient Greek philosopher Aristotle – the Poetics.

It’s only 42 pages long, you can download it for free, use a study guide or buy an adaptation of the Poetics for storytellers and screenwriters.

All of writerly wisdom is there. Quite sobering to realise that the creative writing industry is so old. Makes you wonder why a philosopher such as Aristotle, who laid many of the foundations for the natural sciences, was dabbling in the mechanics of theatre.

It’s not a coincidence that the greatest mind of several generations realised that drama had a pre-existing structure, and that you could apply a taxonomy to dramatic works, in common with all natural things. He put his students to the task of analysing the most popular plays of the past few decades.

What did the most successful ones have in common, he asked?

Aristotle’s Poetics is a two thousand year-old study of blockbusters!


In between each writing project, I tend to re-read at least sections of books on techniques of plotting. This is dense, intense knowledge; it takes many hearings before things sink in properly. Much of the knowledge, a writer might already have. It becomes a matter of judging weight, example and experience.

To use one concrete example: Aristotle’s Reversal of Fortune. Complex plots always require one, Aristotle says. They should take place in the final act and should take the protagonist’s fortune from favourable to unfavourable. The opposite is also possible but Aristotle preferred tragedy.
The reversal of fortune should be in some way traceable to a flaw in the protagonist. In EMPIRE STRIKES BACK it is Luke’s hubris that takes him to the deadly confrontation with Darth Vader. The audience has seen Luke’s hubris for what it is, because his Mentor, Yoda warned him in the strongest terms that he shouldn’t go. Yet Luke couldn’t stop himself. A fatal flaw, but we sympathise.

Finally, the Reversal of Fortune should ideally coincide with another key element: the Recognition. The protagonist should recognise something about themselves and/or the antagonist, which makes the next action they take unbearable, poignant or downright impossible.

So it’s not enough that Vader has Luke lined up for death at light-saber-point. This is the moment in which he reveals that he is Luke’s father, who Luke believed to have died at Vader’s hands. Pure Aristotle!


Aristotle discusses the types of recognition, concludes that for the antagonist and protagonist to recognise themselves as family is the strongest. His favourite drama is Oedipus Rex, in which Oedipus kills a man at the beginning, then becomes the lover of that man’s widow. Only at the end does he realise that the woman, his lover, is his own long-lost mother and the man he killed was his own father. His grief is so maddening that Oedipus is driven to put out his own eyes.
I’ll admit it; I spend many, many hours carefully plotting the reversal/recognition moment. In the five-part story structure they are usually placed at the crisis/climax, during Act 3. It’s the event to which all others lead.

It’s said that Agatha Christie wrote her books, created the crisis/climax, and then went back and put in place all the implications leading up to the big reveal. Christie’s plots almost always have a long-lost, unrecognised friend or relative coming out of the woodwork – she was an Aristotle girl too.


Knowing HOW it’s done, doesn’t mean you can do it well. But writers like Aristotle, Robert McKee, Syd Field can teach other writers to be keenly aware of plot structure.

Then it’s time to get down and dirty and for a few weeks, look at the trees, not the wood.

Next on the Zero Moment blog tour, Numbers in the Dark by Italo Calvino - a short story collective review on www.nextread.co.uk.

Fantastic! Thanks so much for stopping by MG! It was grand having you on MFB. Now uh, get working on that topsekrit project we've heard about!
Who wrote this? Liz at 4:50 pm